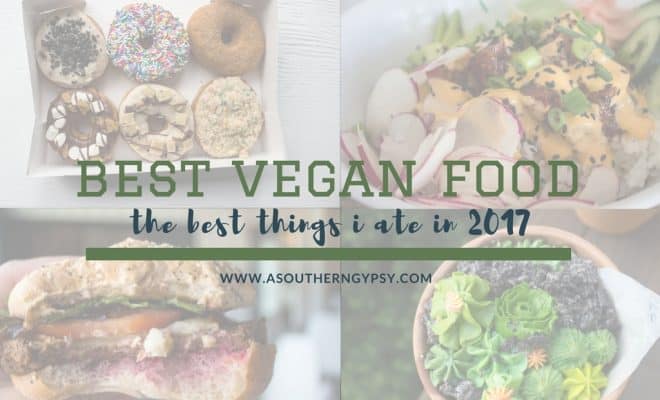 If I lacked anything in 2017, it definitely wasn’t good food. I may not have traveled to a bunch of new countries but I did get around this past year and I definitely packed my stomach with me. As I went vegan in May 2016, 2017 was my first full calendar year as a vegan and I wanted to share the best vegan food from the year.

My favorite vegan burger that I ate in 2017 was the lentil walnut cheeseburger from Avo in Nashville, Tennessee. Avo used to be a raw-only restaurant when they first opened but under new ownership, they have expanded to cooked food as well and I’m pretty stoked because this unique burger is out of this world. Read more about Avo here. 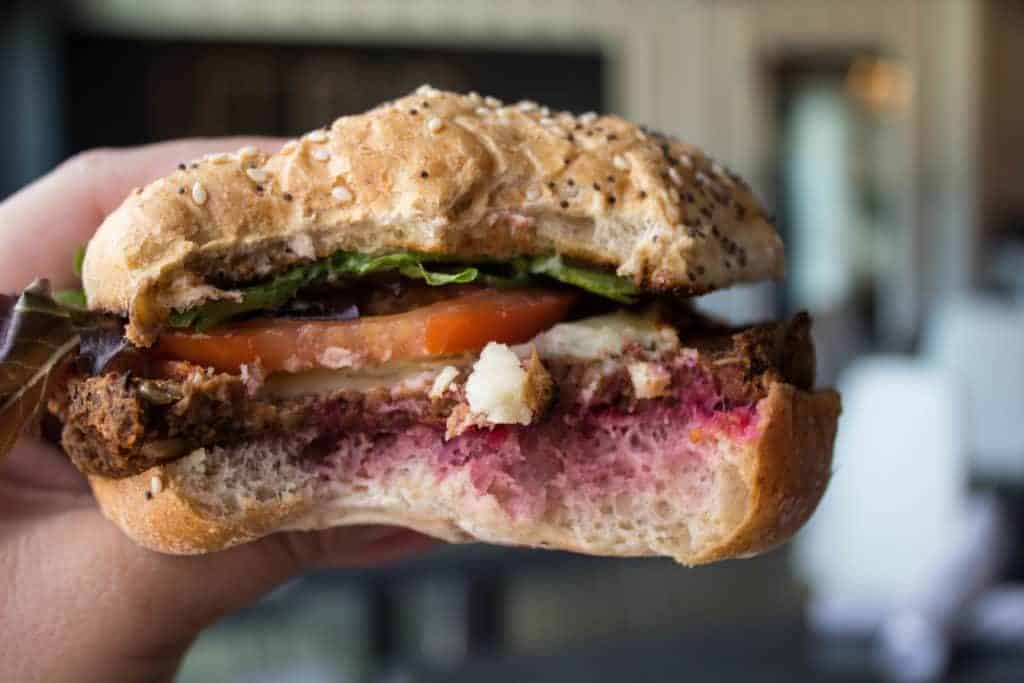 I’m actually kind of surprised by my choice here. I love, love, love mac & cheese but I’m also very picky about it. I had this delicious mac & cheese in St Louis in the spring and have surely tried a lot more since but this one ended up being my favorite. Check out more St Louis vegan options. 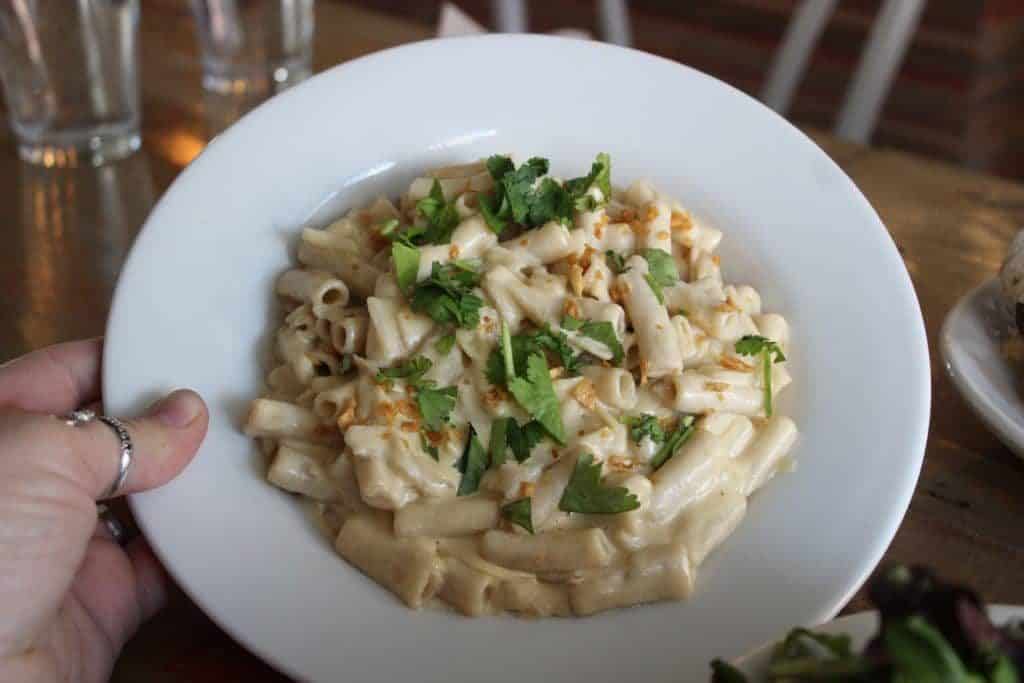 Sunflower Cafe is a local favorite and for good reason! It’s a cafeteria style service and served a la carte. I have a few entrees I regularly get but the buffalo tempeh is my absolute favorite. I usually take a bit of Tofutti sour cream with me as it comes with a vegan ranch but I don’t like vegan ranch. However, as far as vegan ranches go, Sunflower’s is supposedly amazing. See more options in Nashville. 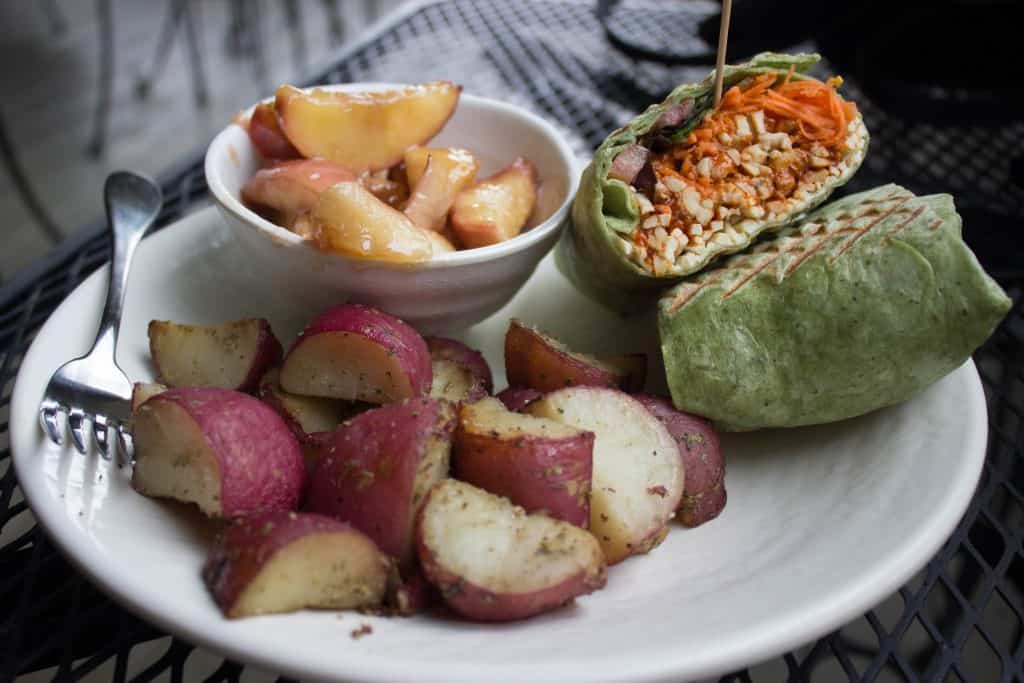 Sarasota, Florida ended up being a pretty decent vegan destination and definitely had a lot more healthy vegan options. I got to try this raw lasagna at Ionie and it was spectacular. I don’t typically love raw food but you even the most junk-food vegans would love this. See more vegan options in Sarasota. 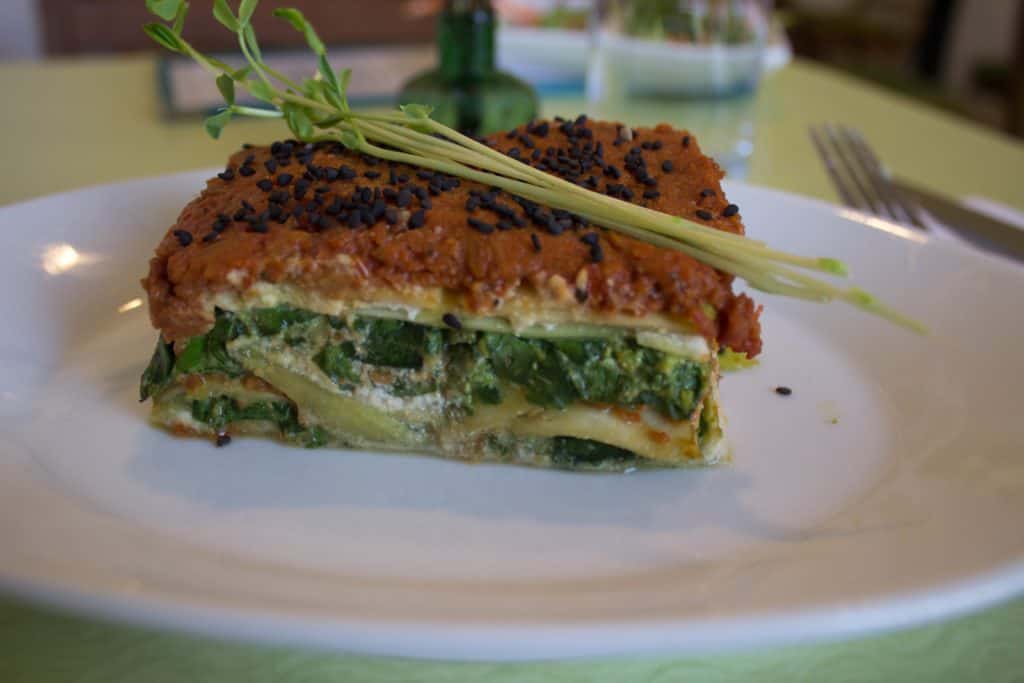 I was so excited about visiting this bar in Indy. Not only do they draw in the weird and unusual (me!) but they also cater to vegans with tons of options clearly marked on the menu with amazing names to boot. I had the seitan wings (with ‘asshole’ sauce), sack of balls (yummy sugary things) and stoner fries. See more vegan options in Indy.

These may not look like much but I assure you they are amazing! In Dublin, Ireland, you can find a traditional chipper – a late-night fast food establishment – with tons of vegan options including these curry fries. You won’t be able to stop eating them! 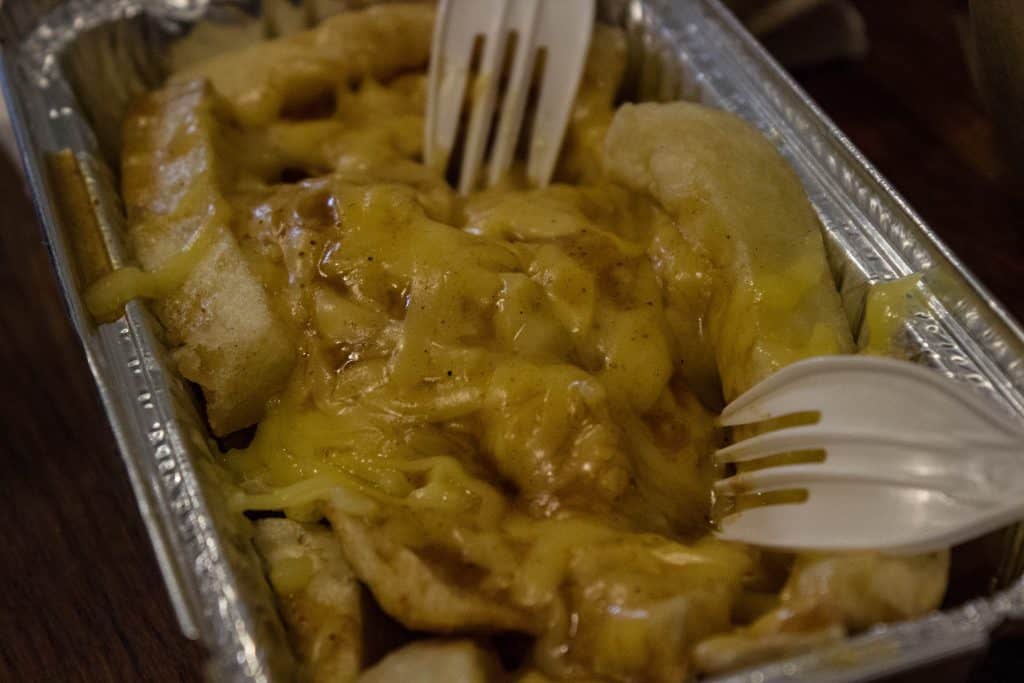 Morel’s in Louisville, Kentucky is a new vegan establishment that produces amazing vegan versions of traditionally non-vegan foods. When I visited, they, unfortunately, hadn’t opened with their full menu but I did get the below items. These were all so amazing. Now, they are open with menu items such as Farby’s (Arby’s mock roast beef), a mock Chick-fil-A sandwich and more! See more vegan options in Louisville.

I had this amazing combination in West-Lafayette, Indiana of all places. At first, this city is not what you would think of as vegan-friendly but with a little digging you can find a few options. The EMT food truck has some amazing vegan options including this veggie burger on a waffle bun. Their vegan spicy mayo is what really takes the cake. See Lafayette-West Lafayette options here. 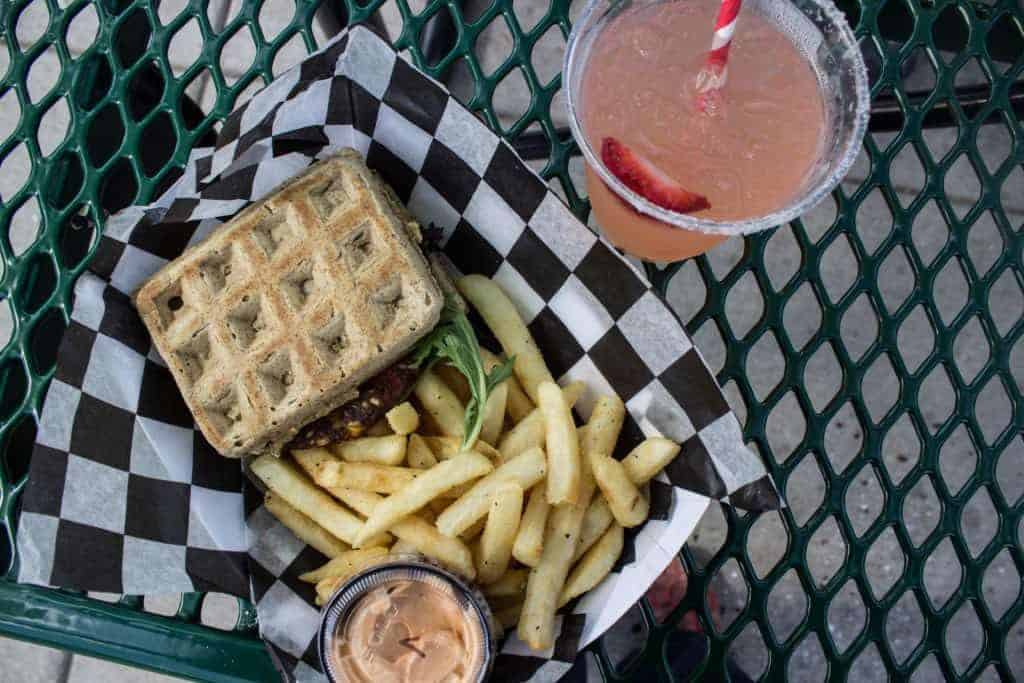 I was really excited to finally visit Doomie’s after hearing about it for a while. As a Southerner, chicken and waffles is a staple here and as soon as I saw a vegan version of this comfort food, I knew I had to try it. It definitely did not let me down. The portion sizes are also huge! 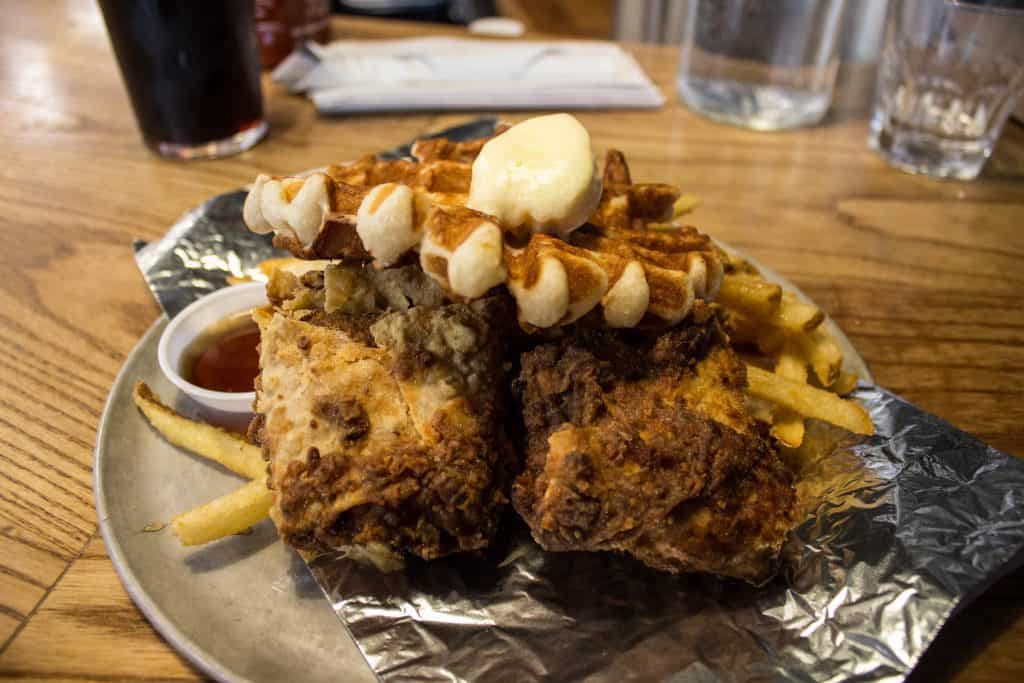 I’ll admit I don’t do much fine dining so it wasn’t hard to pick for this category. However, the food at Browns was absolutely fantastic and a highlight of my three-week Ireland road trip. This wild mushroom ravioli was melt in your mouth good. Check out the rest of my fine dining experience in Derry. 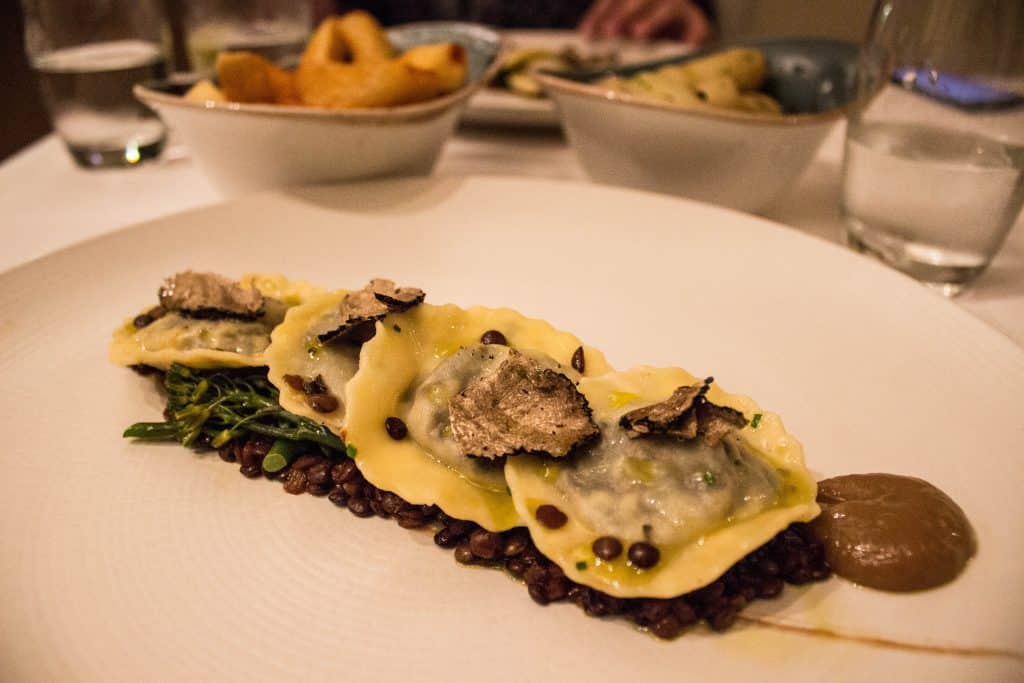 In Nashville, we have this thing called hot chicken. It used to be one of my favorite things to eat before going vegan and is a unique spice blend that gives it a unique flavor. It is indeed extremely spicy. After going vegan, I’ve searched for a good alternative and I have to say Grins hot tofu is my favorite. Also, this mac and cheese is a close second to my favorite mac and cheese. See more vegan options in Nashville. 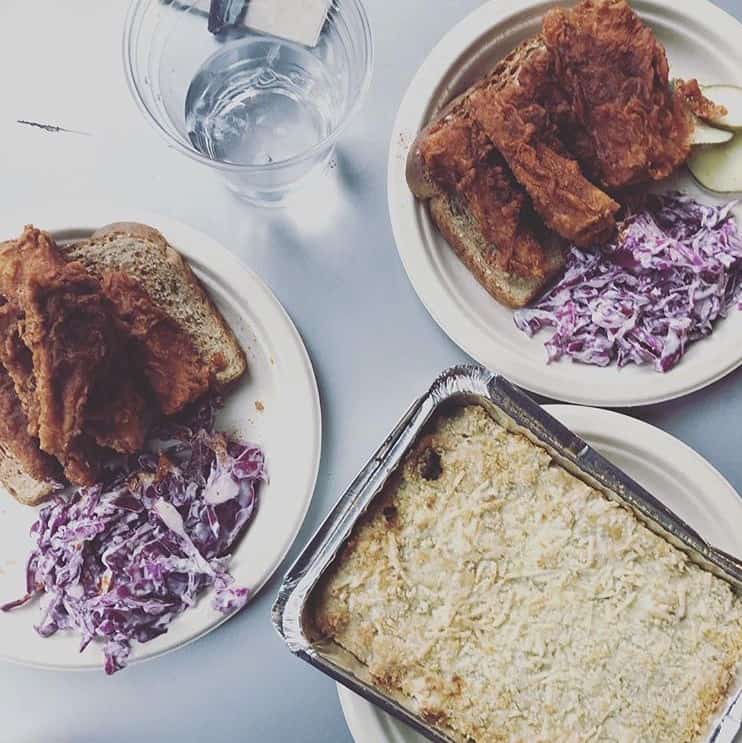 Sushi was my other favorite thing pre-vegan days. It is so incredibly hard to find a mock sushi flavor. I can easily get veggie rolls but finding something that actually has that sushi taste is hard. I had one of the best meals of my life that satisfied that sushi craving in St Louis, Missouri. The ‘fish’ is actually made out of watermelon. See more St Louis options here. 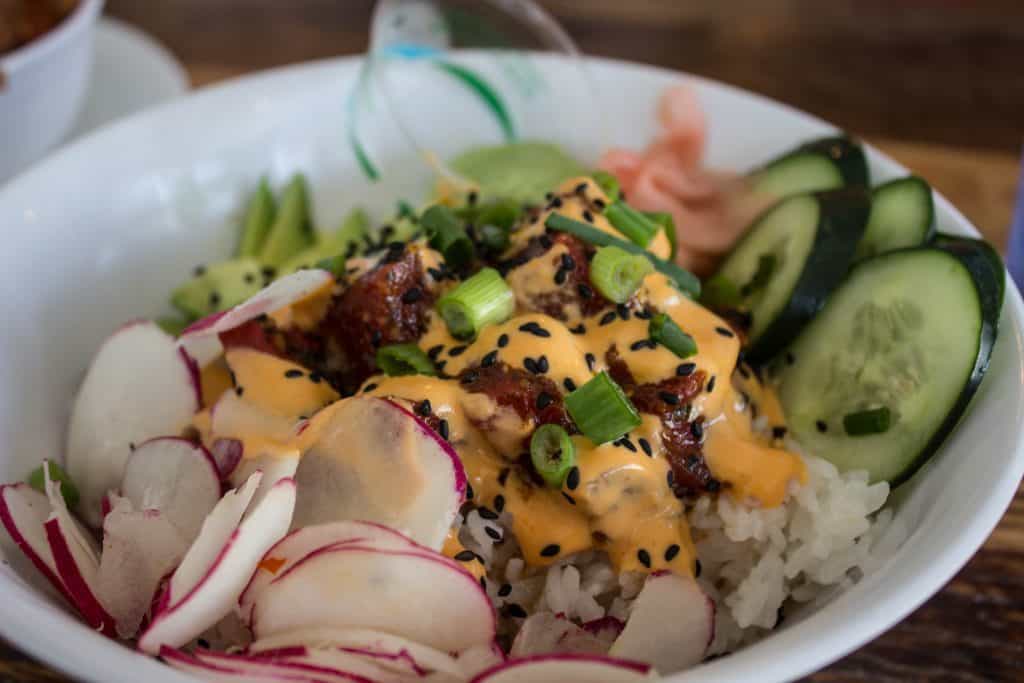 I eat a lot of pizza. Don’t judge, okay? A lot of times it’s just Papa Johns with no cheese though. I was excited to find this metal-themed all-vegetarian pizza spot in St Louis. Their “meats” are all vegan and they have a cashew cheese. So good! 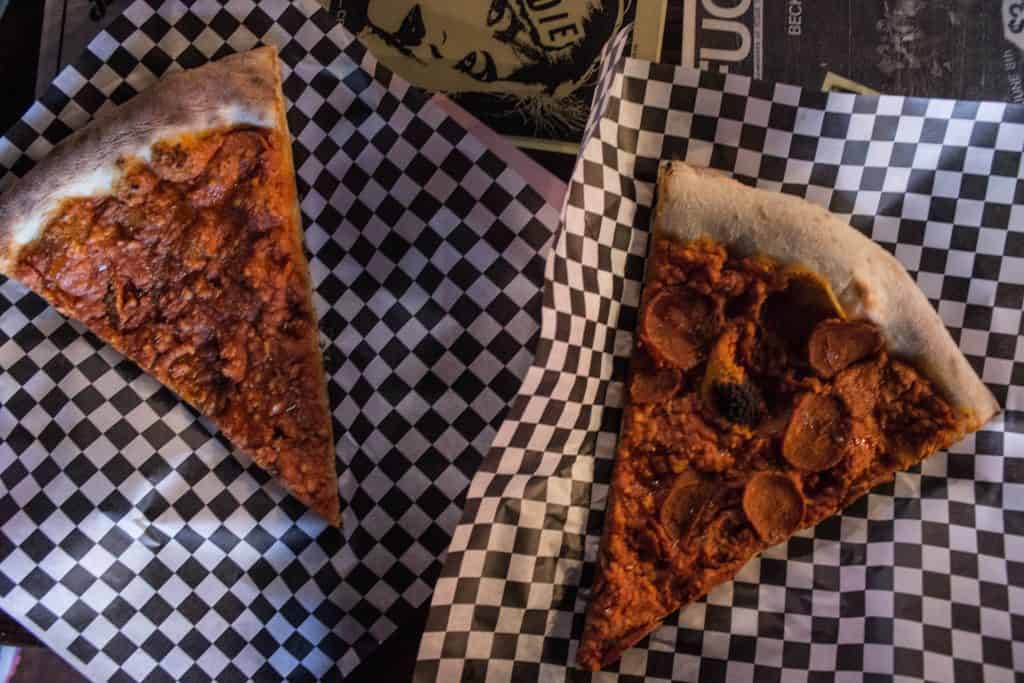 While not exactly served on the street, they do specialize in vegan street food and started in a food cart. I’m not even sure what this consisted of but it was basically fried seitan, french fries and grilled onions and peppers. It was delicious and all the fried goodness you want after walking around all day. See more vegan options in Galway. 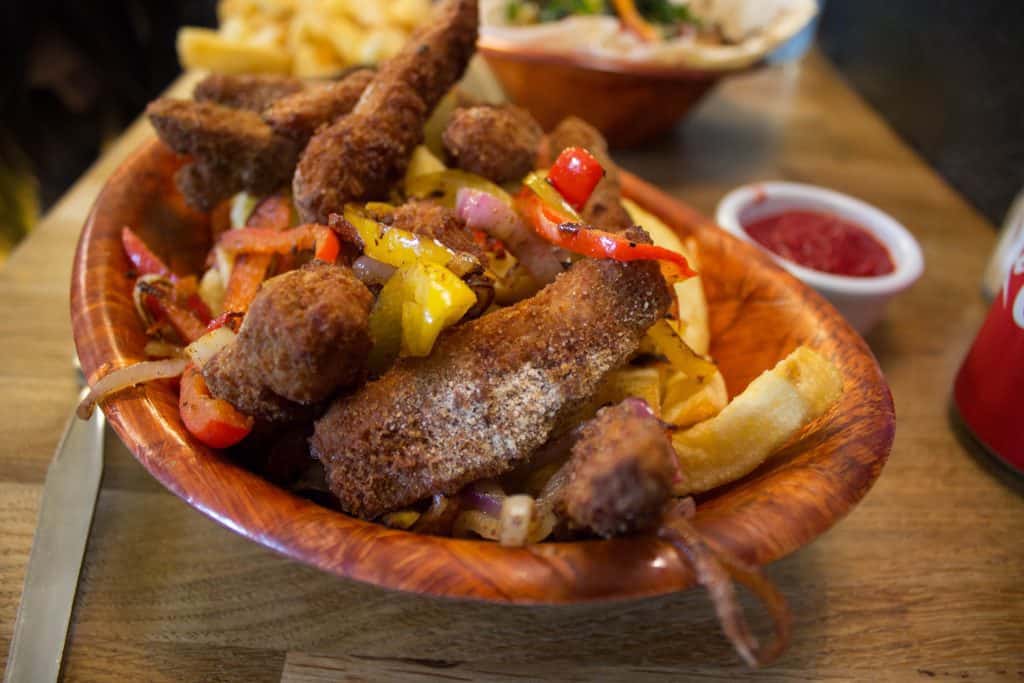 These pizza rolls were to die for! They weren’t exactly what I was expecting (I was thinking like the frozen pizza rolls) but they were even better. They were filled with some kind of vegan sausage and cheese filling and I could have eaten about twenty of them. 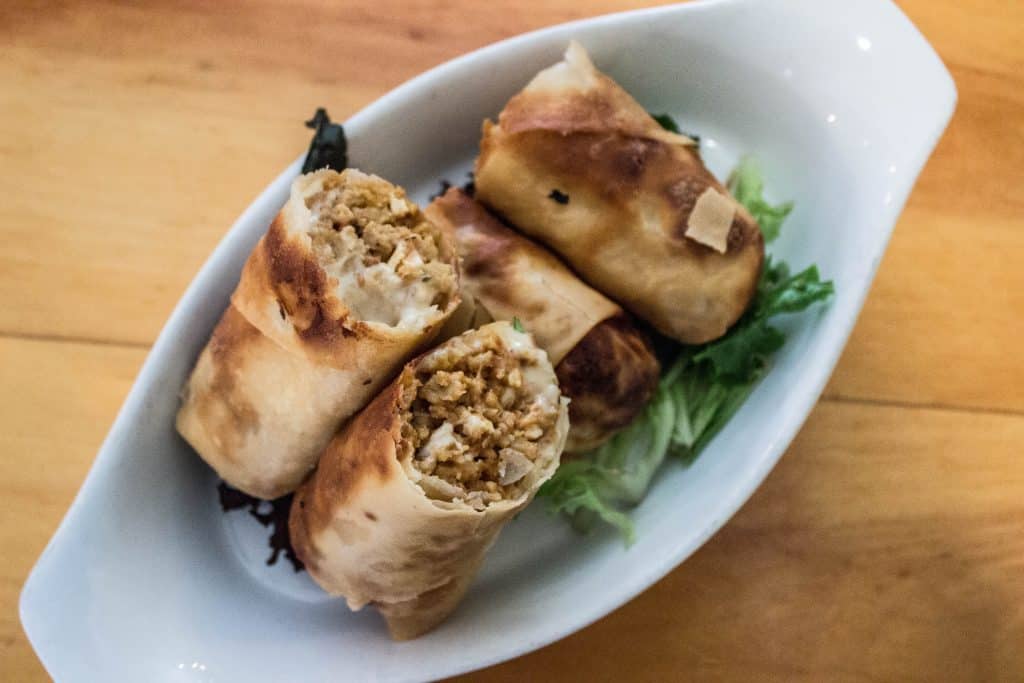 This is the thing I want on my death bed, folks. The hot chik’n biscuit from The Southern V is one of my favorite things in the whole world and I try to get it anytime I can. The Southern V is only open on the weekends and actually just closed their small take-away only place in preparation of opening their sit-down restaurant in the spring. I can’t wait! 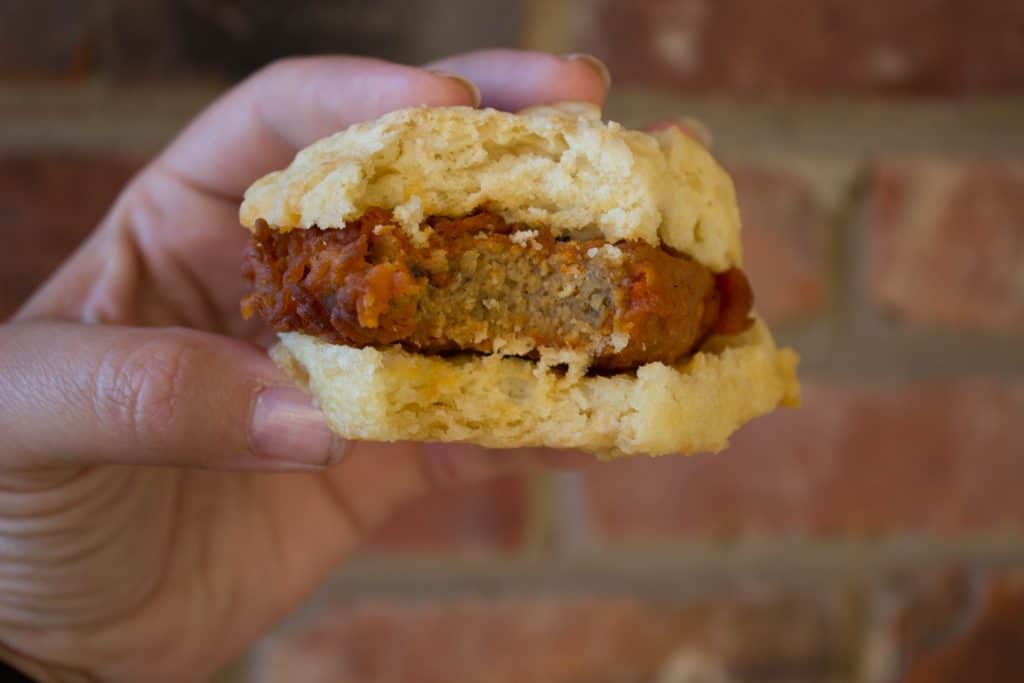 I wanted to drink like ten of these lavender lattes while I was in Toronto. I don’t think I’ve ever had a more perfect drink prepared for me, to be honest. Also, this focaccia bread with tomato, arugula and cashew cheese was also one of my favorite things of 2017.

READ THIS POST  Vegan in the Philippines – Here are the Basics You Need to Know! 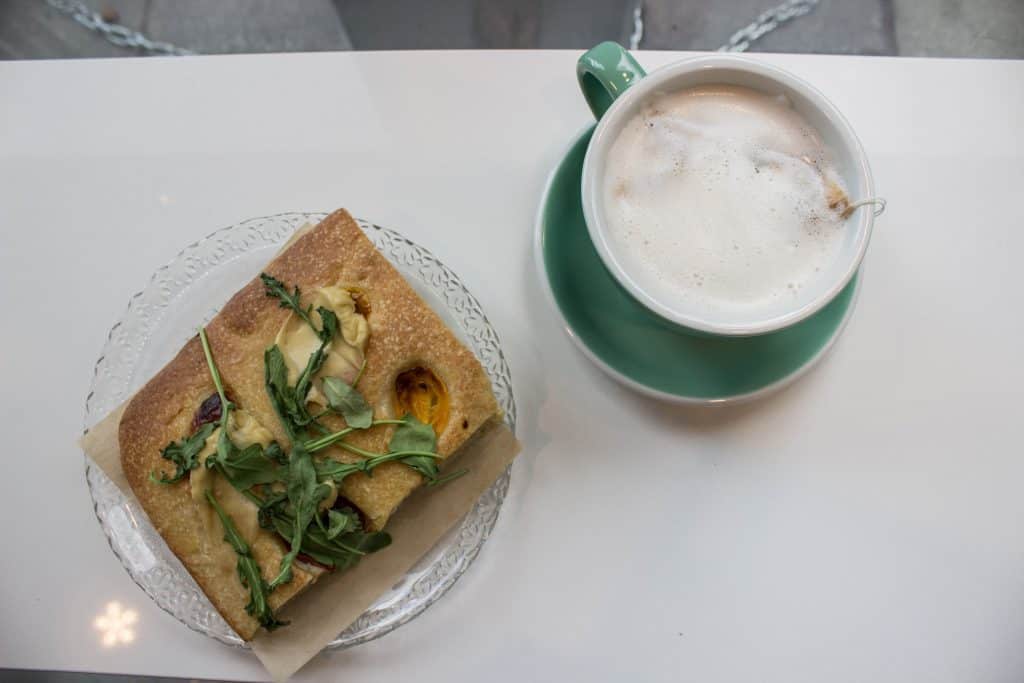 Avo is well-known for their avo margaritas. Don’t worry. If you don’t like avocados, you can’t even taste it but it does give you a nice creamy margarita and it is so good. Go during happy hour though to save you some money. 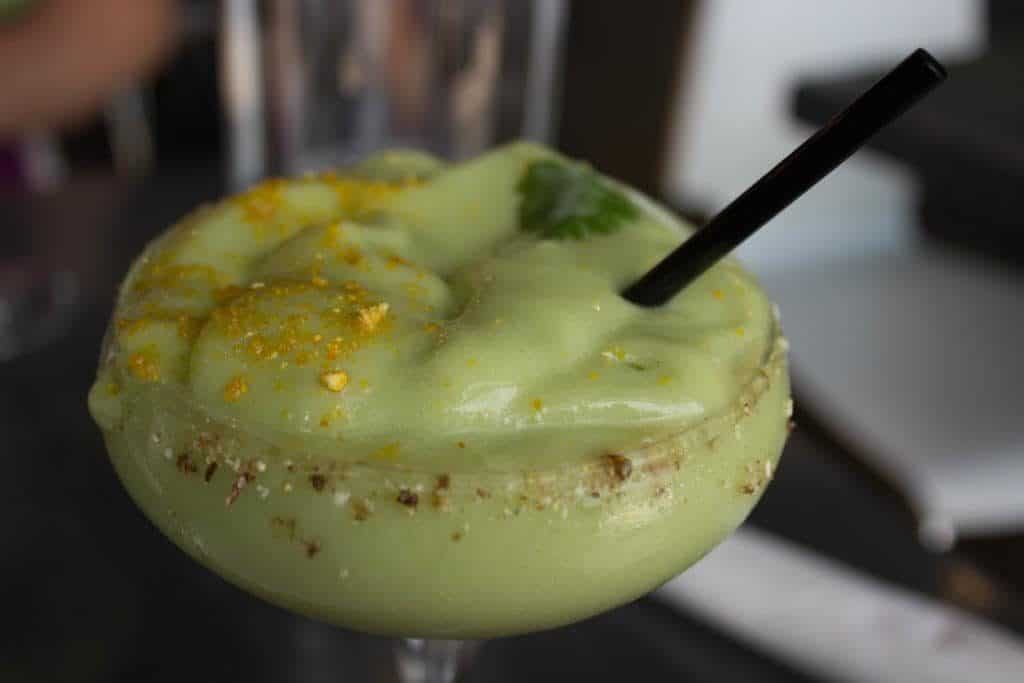 How amazing do these donuts look, amiright?! Did I eat them all? Yes, yes I did. 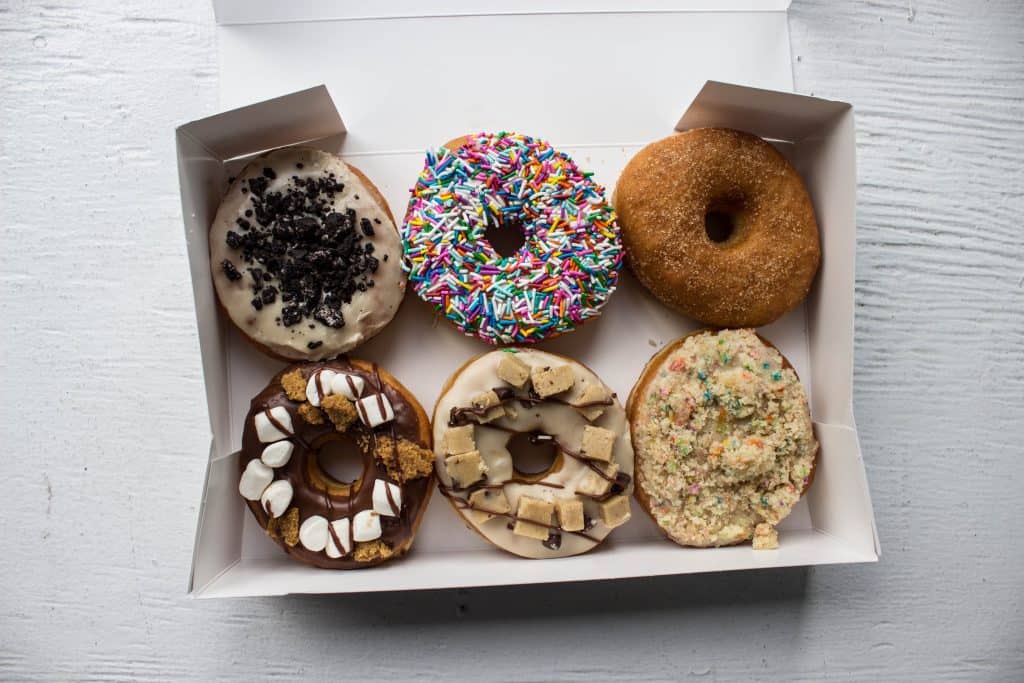 Leeuw Bake Shop is a small bakery run by Beca. She has been running everything out of her home, selling online, via Instagram and through a few local shops in Nashville. However, she is opening her own brick & mortar this year in Nashville and I couldn’t be happier. This amazing cake is almost too pretty to eat. She’s also in the process of turning her whole process into zero-waste which also tugs at my heart strings. 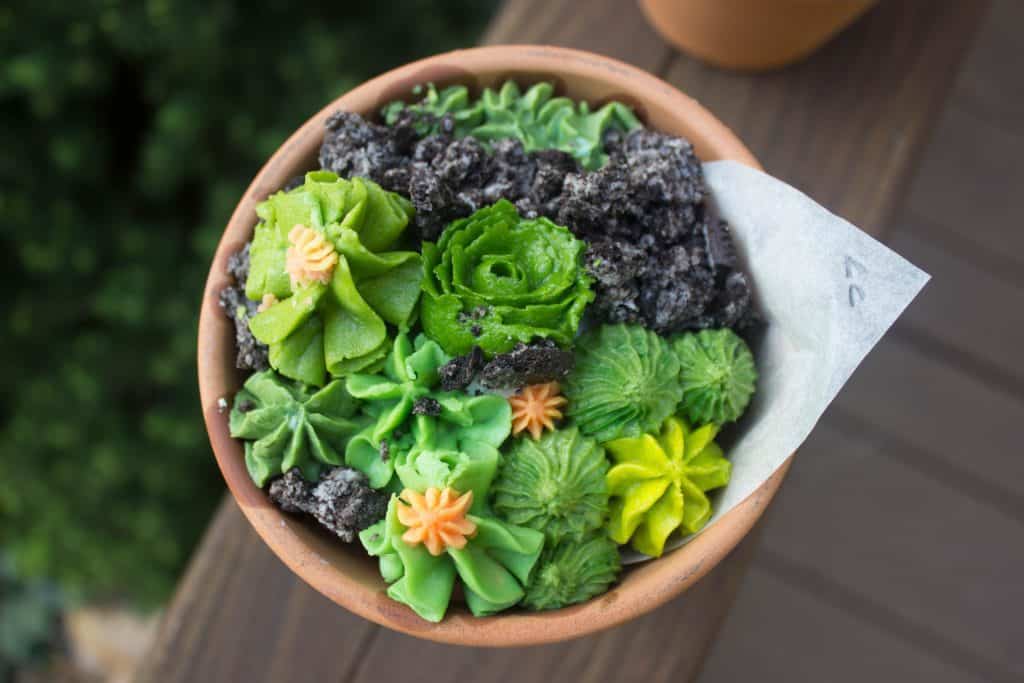 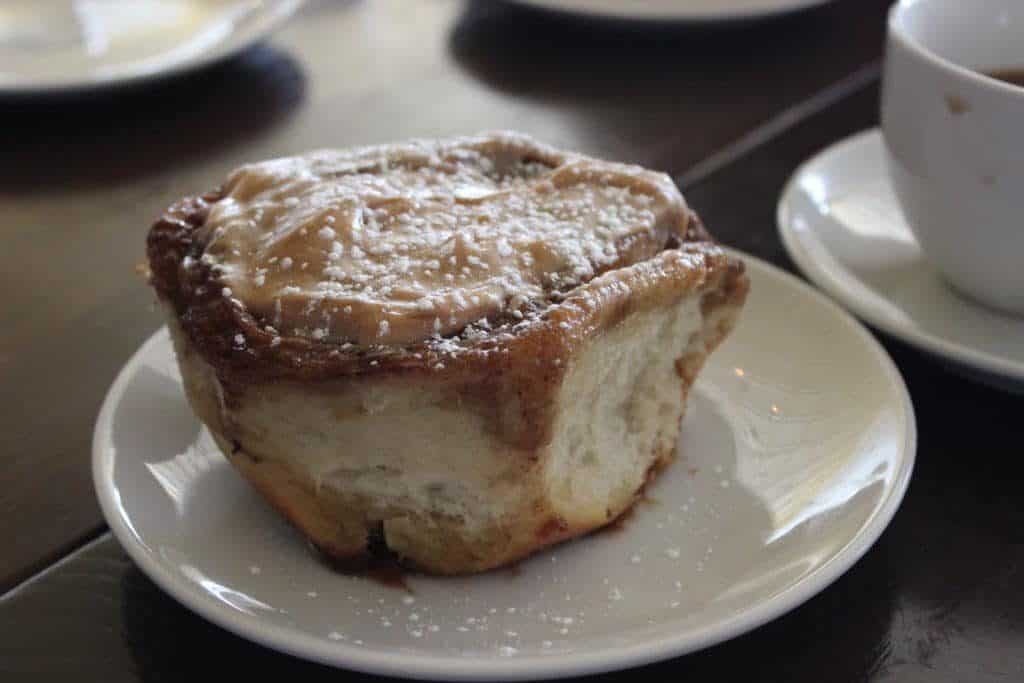 Also, not much competition in this category but I felt like it deserved a spot on this list. The Grilled Cheeserie is very far from a vegan restaurant but they have some amazing and well-marked vegan options including this amazing grilled cheese, tomato soup, tator tots and milkshake. 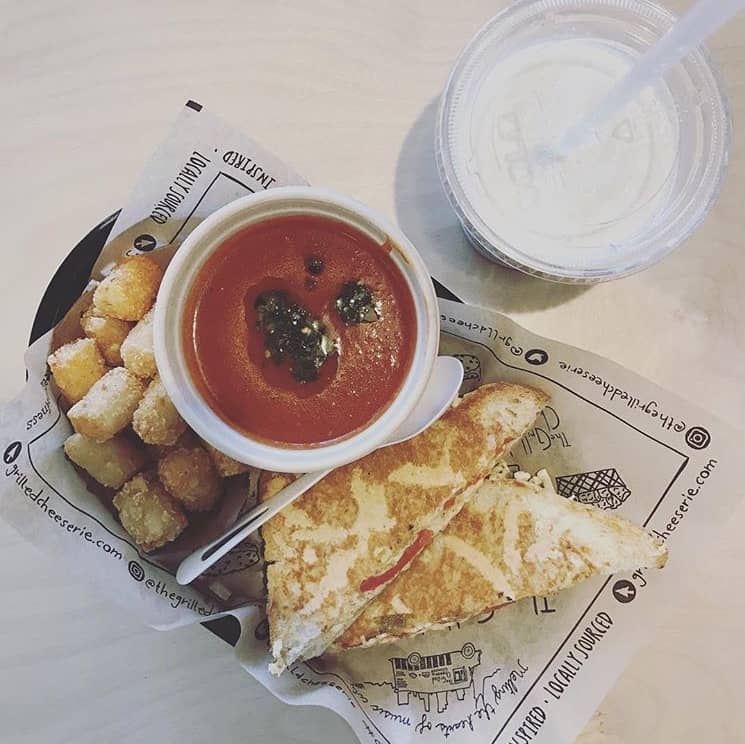 Let’s be real. Everything in this picture deserves to be on this list but those buffalo tofu fingers are the shit. I know the owner of this amazing cafe which opened in 2017 and she is the absolute sweetest. You’ll find lots of comfort foods but all ingredients are sourced organically and locally if possible and everything is made from scratch. The philly is also amazing as well as all of their baked goods. 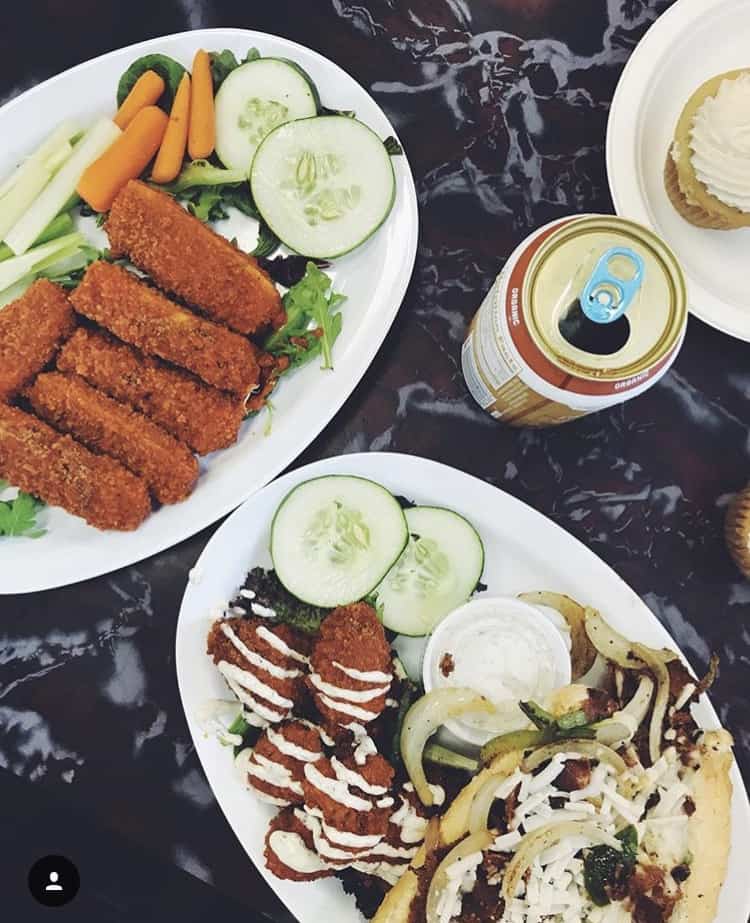 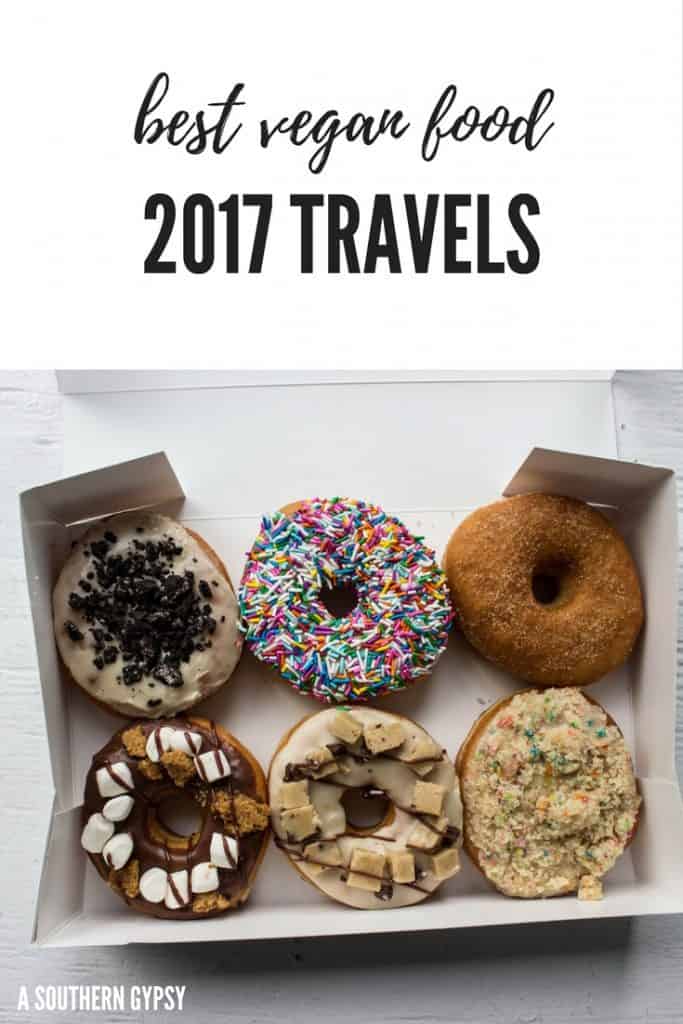 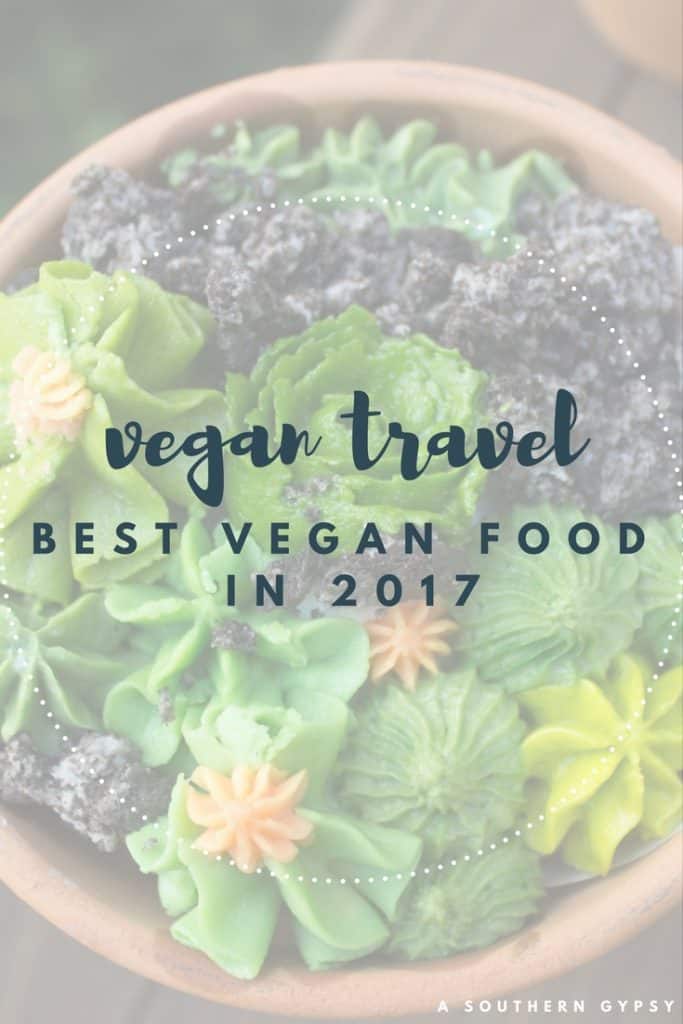