Editor’s Note: I fully encourage everyone to limit travel as much as possible during the COVID-19 pandemic. However, if you do choose to travel, I hope that you’ll do so safely. Please consider visiting outdoor or less-populated destinations, traveling by car, traveling in small numbers, and respecting everyone around you.

One belongs to New York instantly, one belongs to it as much in five minutes as in five years. – Thomas Wolfe

I know some people who think New York City is the greatest place on Earth and some people who have no desire to visit or return again and while I suppose I can understand either sentiment, I’m so happy to be a part of the former group. I think I fell in love with New York City before I ever stepped foot in it and the actual physical presence in the city actually solidified what I already knew: my heart would always, in one way or another, belong to New York City. I want everyone to love it as much as I do and I know it can be a little intimidating so I’ve put together these tips for visiting New York City for the first time. I’m not an NYC native nor am I an expert but this should at least help ease that intimidation and help you experience the grittiness and beauty of the city.

Where to Stay in New York City

This post was written in collaboration with Hotels.com.
All opinions are, of course, my own.

The options are quite literally endless when it comes to great areas and accommodation so deciding where to stay in New York City can be an easy or difficult decision depending on how you’re looking at it. Without a doubt, you’re going to have an amazing time no matter where you stay but choosing a spot close to the neighborhoods and attractions you’re most interested in will definitely make for an easier trip.

Psst: Looking for more information on New York City? Check out a few of our other posts!

Getting to New York City

First, you’ve got to get to New York City, right? With several airports, train and bus stations, and highways, New York City is highly accessible. If you’re traveling in from another country, you’re likely flying. If you live in Ontario, Canada, it’s not a bad drive though. If you live in the country, you’ll have to compare prices but flying to NYC can be fairly inexpensive especially if you have time to wait on a good deal or have some flexibility.

I was able to fly from Nashville to NYC for less than $100 on Southwest (I actually flew for free because I had points) and I regularly see deals like this all the time from Nashville. My favorite way to search for cheap flights and keep an eye out for new deals is through Skyscanner. Skyscanner allows you to set up alerts that are then sent to your email daily and book that flight as soon as the price drops. I’ve saved a lot of money this way. It also lets you see if it’s cheaper to possibly fly in or out on different days.

There are three major airports in NYC and I swear everyone is faithful to one particular one. On my most recent visit to NYC, I flew into LaGuardia and out of JFK. I found different things I liked about each one. I thought the ride into the city from LaGuardia was quieter and less hectic (and cheaper) but I thought the ride out of the city to JFK easier and more travel-friendly.

Getting from the Airport to the City

You’ve rolled the dice, weighed the decisions, and picked your airport. Now, you need to get from the airport to the city.

Getting around New York City

Does the idea of getting around New York City leave you paralyzed and lost? Don’t let it! New York City is huge, of course. I mean an absolute mammoth of a city. I could live there and probably never feel like I know it all. However, the general layout of the city and getting around is not that difficult. The grid layout is ingenious and the subway system is one of the best in the world.

Understanding the Layout of the City

Manhattan is the long skinny island of the five boroughs and arguably the most popular of the five. It’s also the only borough I’ve spent much time in, unfortunately.

Brooklyn sits on the western side of Long Island and is the most populated of the five boroughs. I was honestly shocked at how large Brooklyn was and I can’t wait to go back and explore more.

Queens sits to the east of Brooklyn and takes up the other portion of Long Island. Queens is the largest borough size-wise and the most ethnically diverse urban area in the world.

The Bronx is the northernmost borough and sits right above Manhattan.

Staten Island, in my opinion, is the least talked about of the five boroughs aside from the Staten Island Ferry.

The subway system in New York City is one of the largest, oldest and best in the world. Aside from walking, it is my favorite way to get around the city. Looking at this map can, at first, be a little daunting but once you get to know it (which won’t truly happen til you’re there), you can appreciate how beautiful it is.

The subway is most commonly referred to as a train. The trains run 24/7 throughout the five boroughs. Additionally, if you get confused, use Google Maps – it will break down exactly what trains to use and where to transfer based on where you’re going.

The black dots on this map represent local stops and the white dots represent express stops. 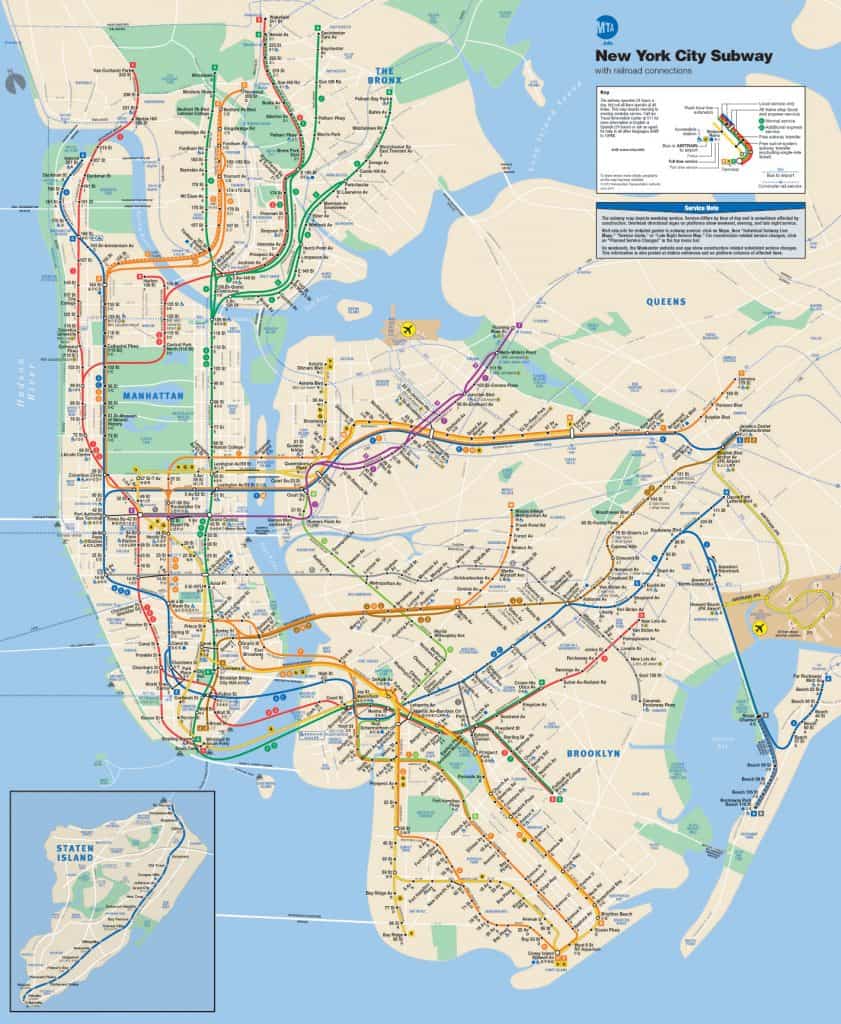 While you can get a pay-per-ride MetroCard, I’d highly suggest getting an unlimited card. There are two different options:

The card will pay for itself (on the 7-day card) in just 12 individual trips which is more than realistic if you’re actually wanting to explore outside the neighborhood you’re staying in. The unlimited cards expire at midnight on the 7th, or 30th day.

You can buy a MetroCard at any subway station at either a station or booth.

**I was in NYC for 5 days but still bought a 7-day pass due to it making more economical sense. Once I arrived at Jamaica Station to get on the AirTrain, I offered my card to someone as it still had 2 days left. Consider doing the same with your leftover time**

You will probably never see me take a taxi or an uber in a city that is so easily accessible via public transportation or on foot because I’m so cheap and they just aren’t as sustainable. However, I know that’s not the case for anyone.

Here are some great tips for hailing a cab including rates and tipping and here is some information on Uber for NYC including a rate calculator.

Walking – one of my best tips for visiting New York City for the first time! I honestly walk so much when I travel. Like unrealistic amounts. I’m this friend.

Seriously though, if the walk is realistic (let’s say anything under 30 minutes) and the weather is good, I suggest it! That’s how you find the best things and see all the really cool things. I love the subway but you don’t see anything. Well, you people watch like nobody’s business which is fun but still…

Are there 5,000 rooftop bars or restaurants or whatevers in New York City? Sure there are…probably. Those quite possibly have a better view but I don’t really go to bars so you’ll have to find those on your own. There are some amazing photography spots all over New York City.

The best and cheapest view of New York City. It’s the cheapest because it’s free. Nothing is better than free. I’d suggest a lovely sunset or sunrise ride on the Staten Island Ferry to get those stunning unobstructed views of the concrete jungle and the Statue of Liberty. 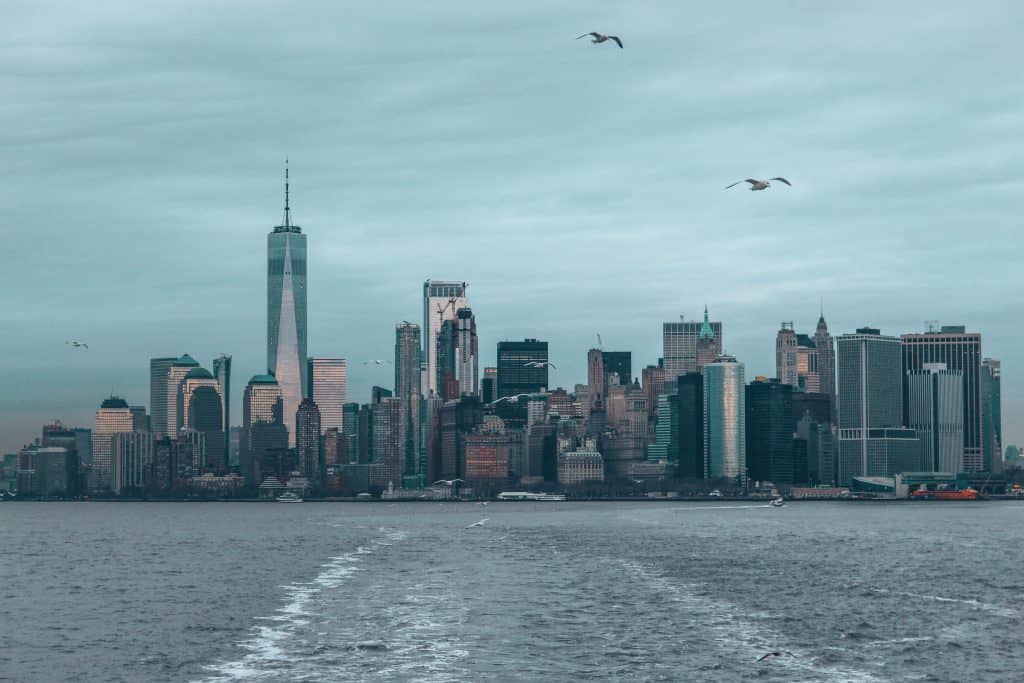 This was my first time being in the Empire State Building and while, yes, it is a tourist attraction, it was still pretty spectacular. Also, all I can think of now is Ted off of How I Met Your Mother. Ted is also my Dad’s name – fun fact. 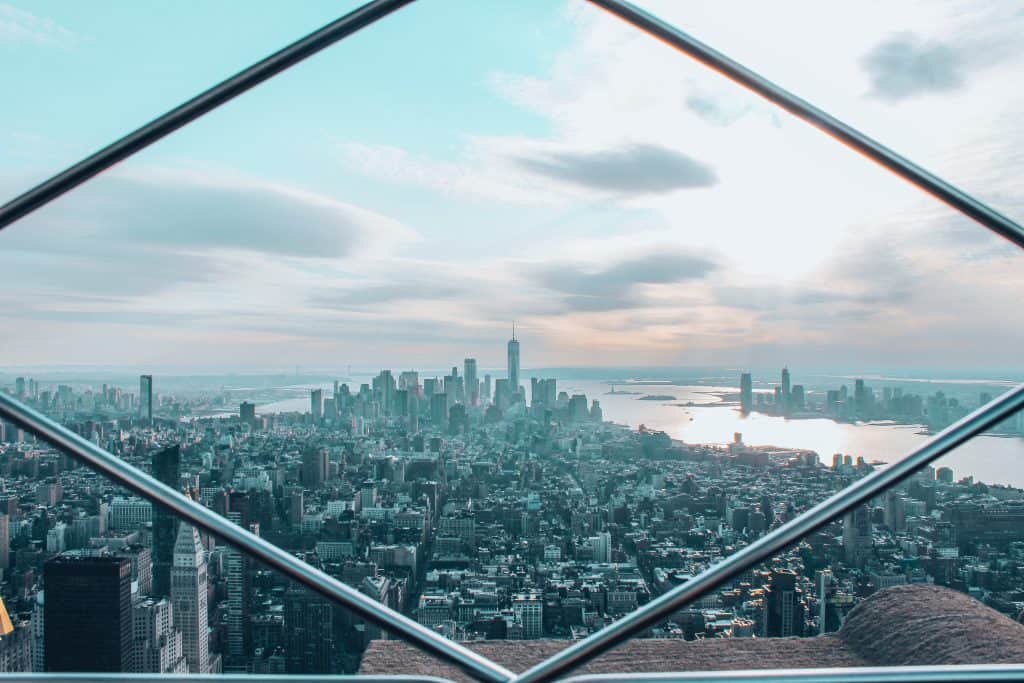 Top of the Rock

What do you think – Top of the Rock or Empire State Building for the view? 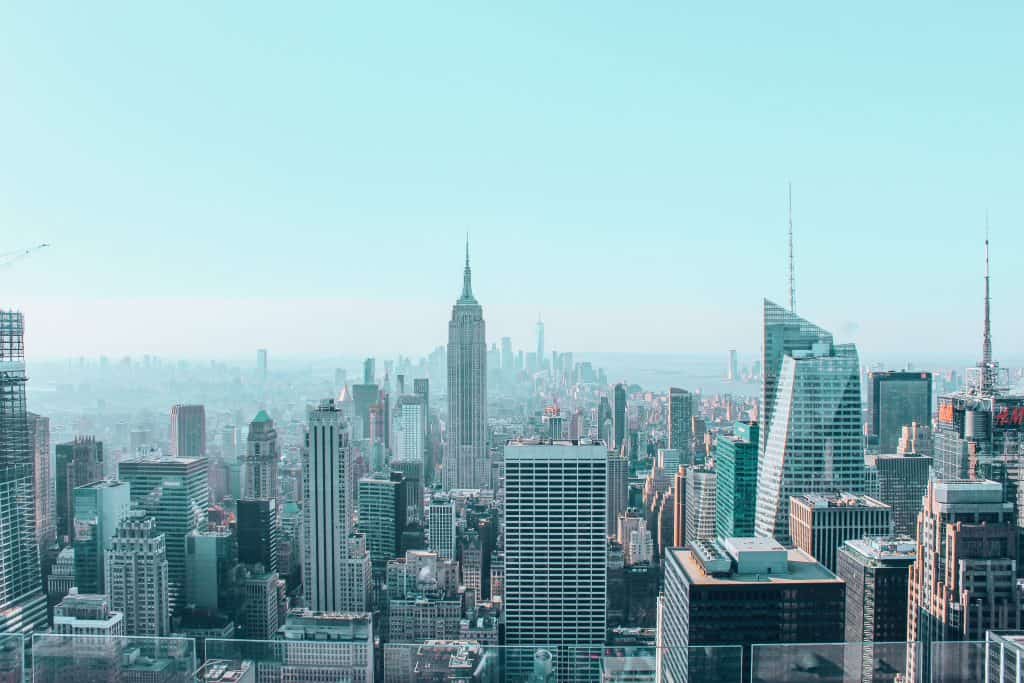 The High Line is also pretty amazing for views of the city in a completely different way. You won’t get a high vantage point like the top of a skyscraper or a fantastic landscape vantage like on the ferry but you will get some pretty great views one of the best green spaces in the city. Also, free. Which has been established as winning. 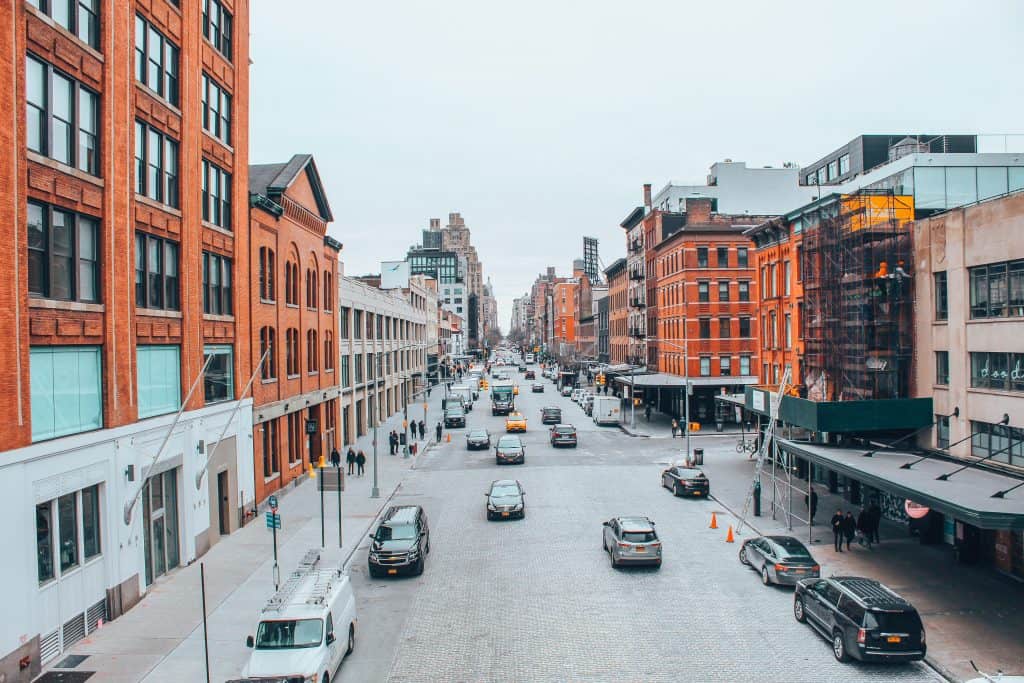 You’re not going to go through wifi withdrawals in New York City. There are tons of public places that you can go to access the internet. Here are some areas you may already be heading to but this is not a complete list.

Accessing wifi is almost a must in today’s world and, luckily, it’s pretty simple to find free wifi in New York City. I would suggest doing so safely though by finding a VPN that works for you. VPNs are the most effective measure you can take to improve online security and privacy.

Is the New York Pass Worth It

The New York Pass is $132 for adults. Depending on which options you go with, you’re saving anywhere from $20-$90.

How to Get Broadway Tickets

There are a few ways to get heavily discounted tickets and on the same day as the show. Here’s a quick rundown.

I hope these tips for visiting New York City for the first time helped or will help. If there are any questions I didn’t cover but you’re curious about, pop them in the comments and I’ll add it or find the answer for you!

What to Pack for New York City

Looking for accommodation in NYC? Check out reviews here and book here.
Want to know where I stayed? HI NYC Hostel
Want to know where to eat in NYC? Vegan Guide to Manhattan coming soon!
What else have I written? You can find more NYC posts here.
Like this post? Have Questions?Hit me up on Facebook | Twitter | Instagram | Pinterest | Email 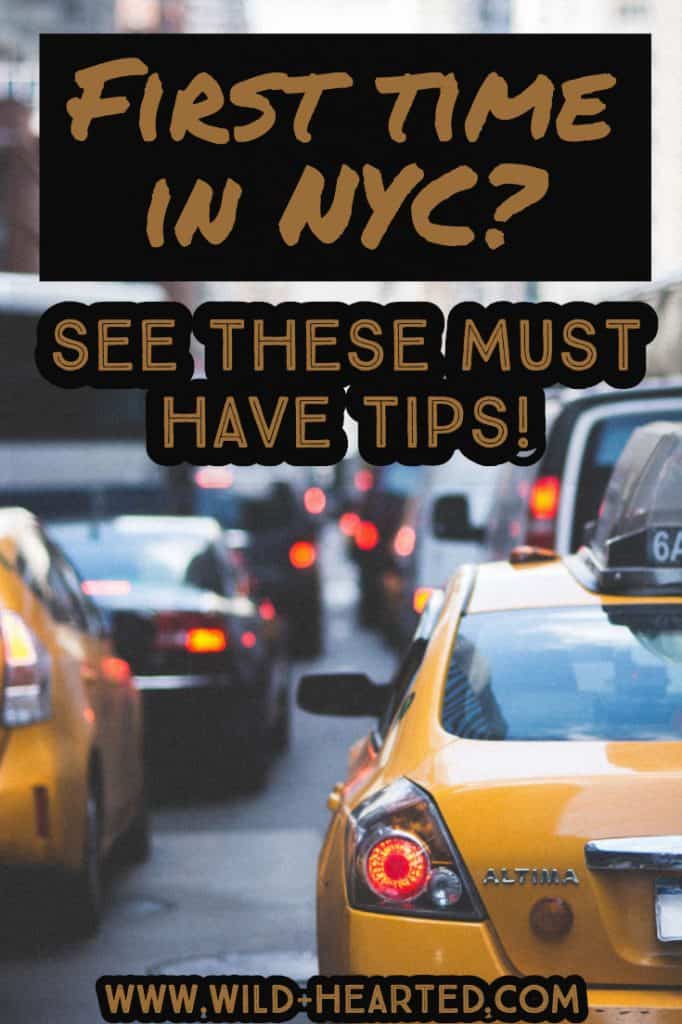 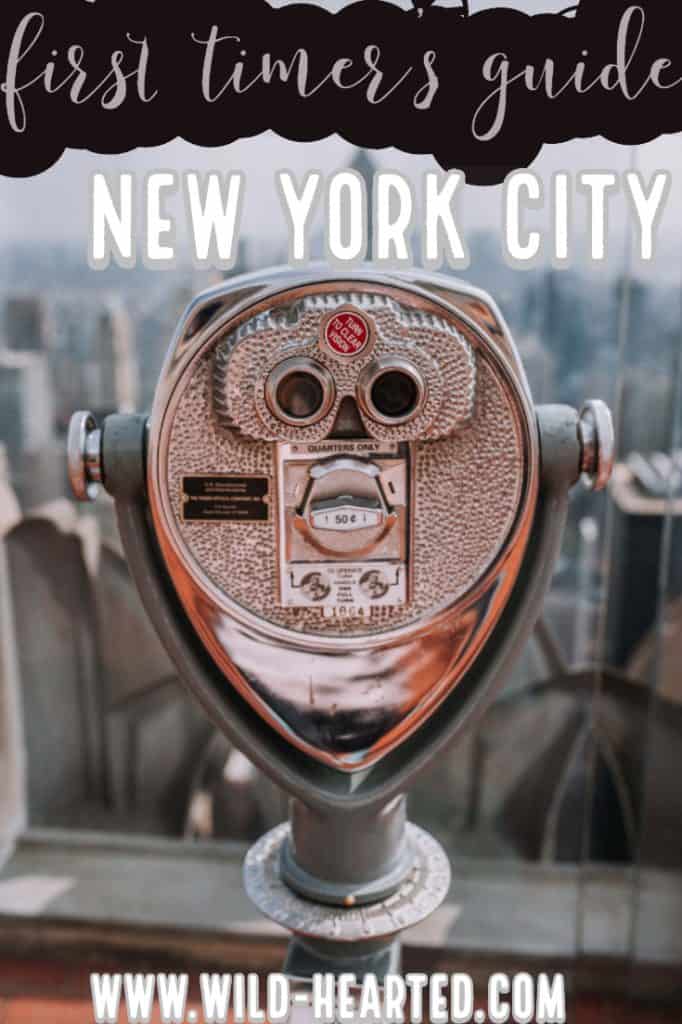 6 Vegan Restaurants You Must Try in Indianapolis