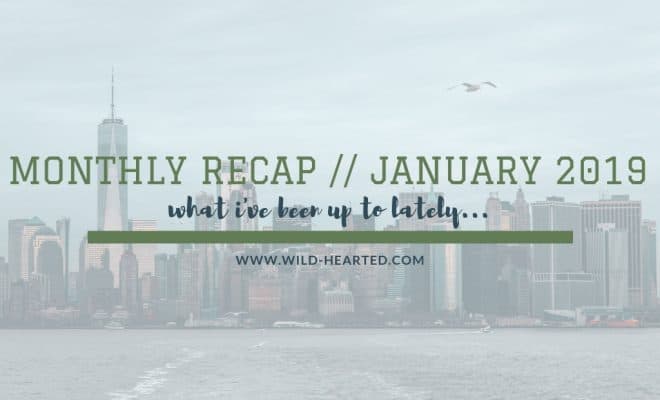 This year is starting off strong – which I’m not sure is always the case for me! I always say how THIS (insert whatever year) is going to be the year. I always fail though. But, not this year. 2019 actually feels different and if the rest of the year goes anything like January, I think I’ll be okay. Make sure to let me know how your month went in the comments!

MY MONTH IN TRAVEL

I only went to one place in January but it was one of the best places in the world – New York City! The initial reason for planning a trip was for IMM – a networking day for travel media and travel brands to get together – and the New York Times Travel Show. It was the first time for me on both accounts and I really enjoyed it!

This was also a really good excuse to plan a trip back to the city – when do you ever need an excuse though? I’ve been to New York City several times in my life but I realize now that most of them were as a child or a young adult. It had been years and it certainly was well before I was vegan. I was so excited to eat my way around the city while occasionally coming up for air to do some other things too! 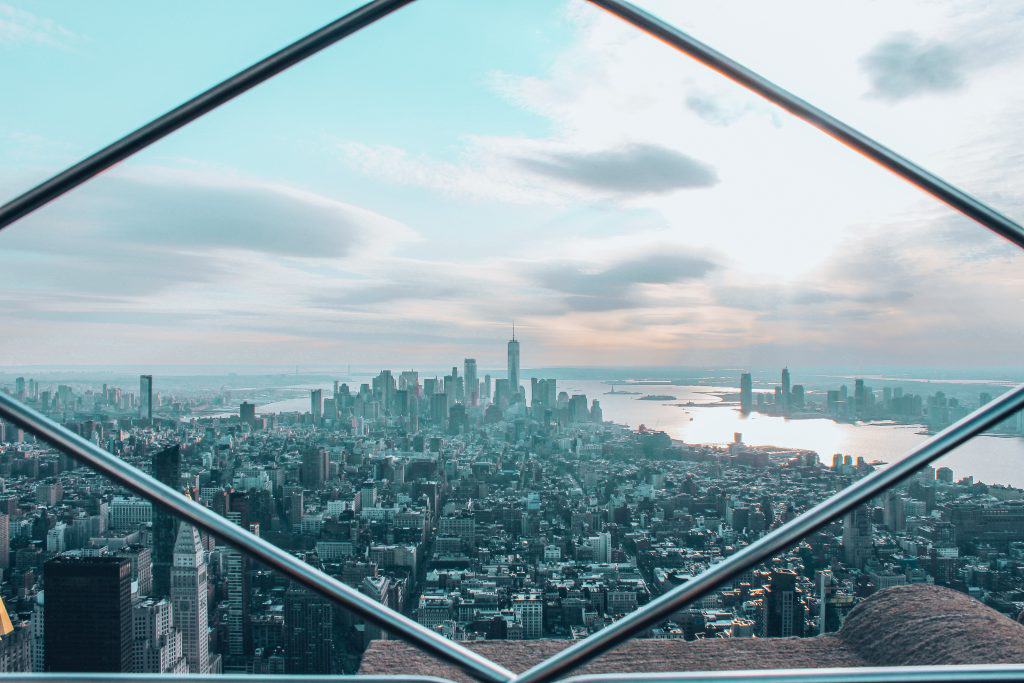 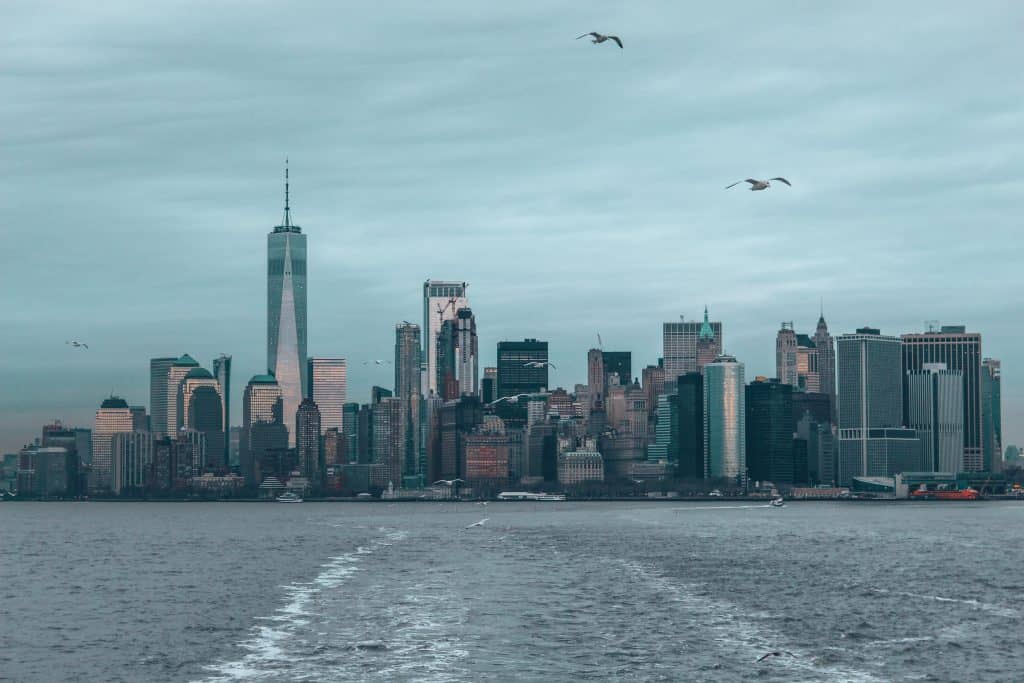 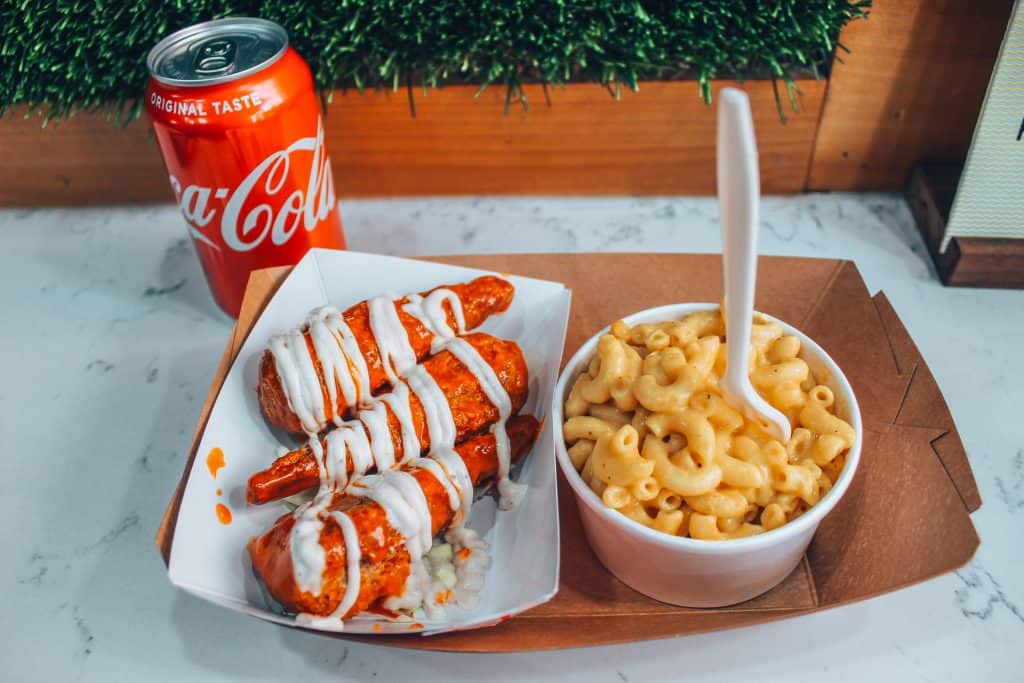 January was actually really exciting because…I moved! I’ve been semi-open (may start writing about this more because it’s important to know you’re not alone) about the fact that I left a really horrible relationship a year ago. In doing this, I knew it would mean some sacrifices on my part because I wouldn’t be able to afford certain things on my own. So, I moved back in at my Mom’s. I was able to also get my dog back from my ex so then it was my Mom, me, her cats, and my dog (who hates cats). Then my brother graduated from grad school and moved back home. You can imagine all the excitement.

It was long overdue! So happy to have a place to call my own now and while it was a leap of faith a bit financially, I already feel like I’ve been more productive and made other amazing changes in my life. 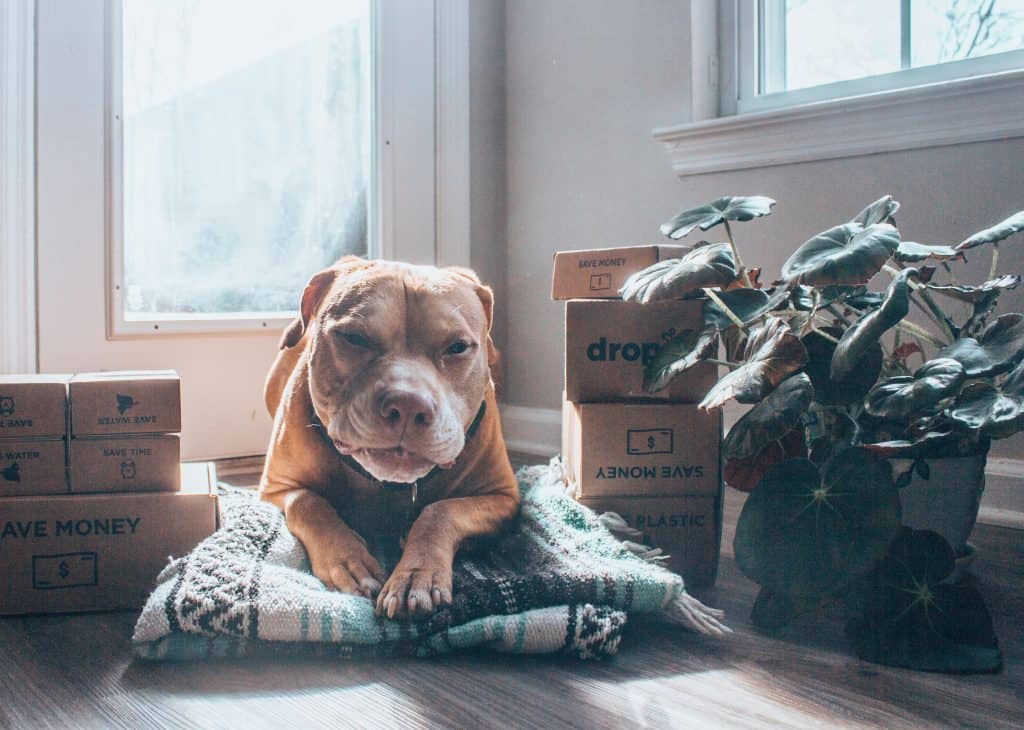 I think I’ve said – maybe one too many times – how much I love Asheville. It’s just simply an amazing city and region. I’ll keep visiting there over and over and, yes, I’ll keep telling y’all how much I love it. My latest Asheville post was how to spend 36 hours in Asheville. While I suggest spending more time there, sometimes you’re only passing through or only have a weekend available to explore – this itinerary is for you! 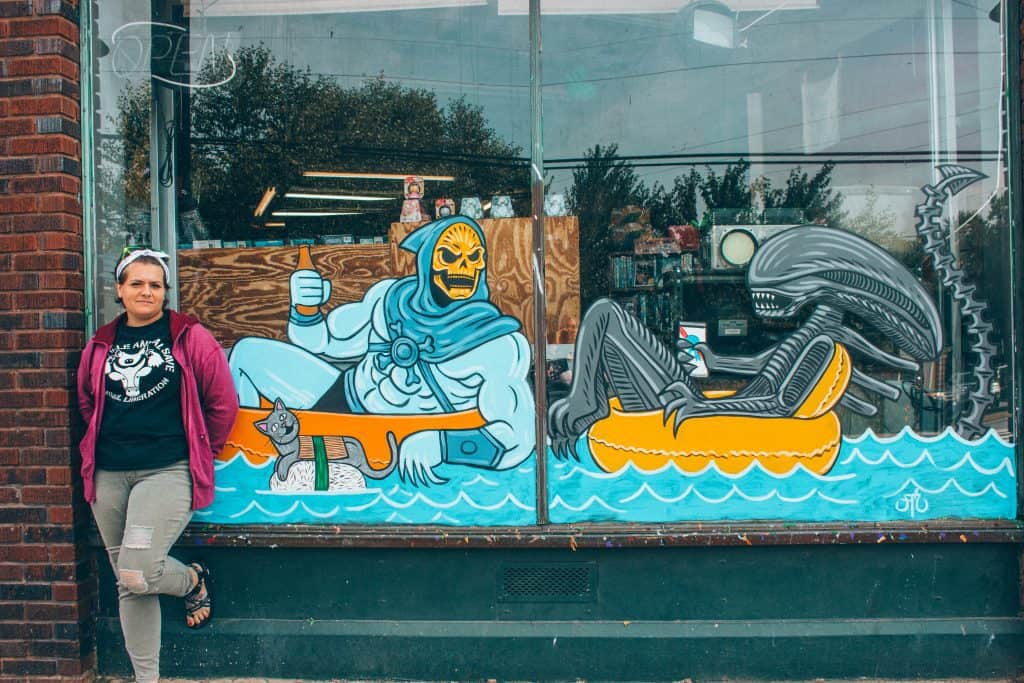 OTHER POSTS PUBLISHED IN JANUARY

That’s hard to choose in a place like New York City! I’m probably going to have to go with the food in general at The Cinnamon Snail. The Cinnamon Snail started out as a food truck but has a brick and mortar in Pennsy Hall. I actually ended up eating here a couple times. Once with my friends, Chris and Heather, and again on my way to the airport since it was kind of on the way.

That cinnamon roll is to die for – one of the best, if not the best, I’ve had. 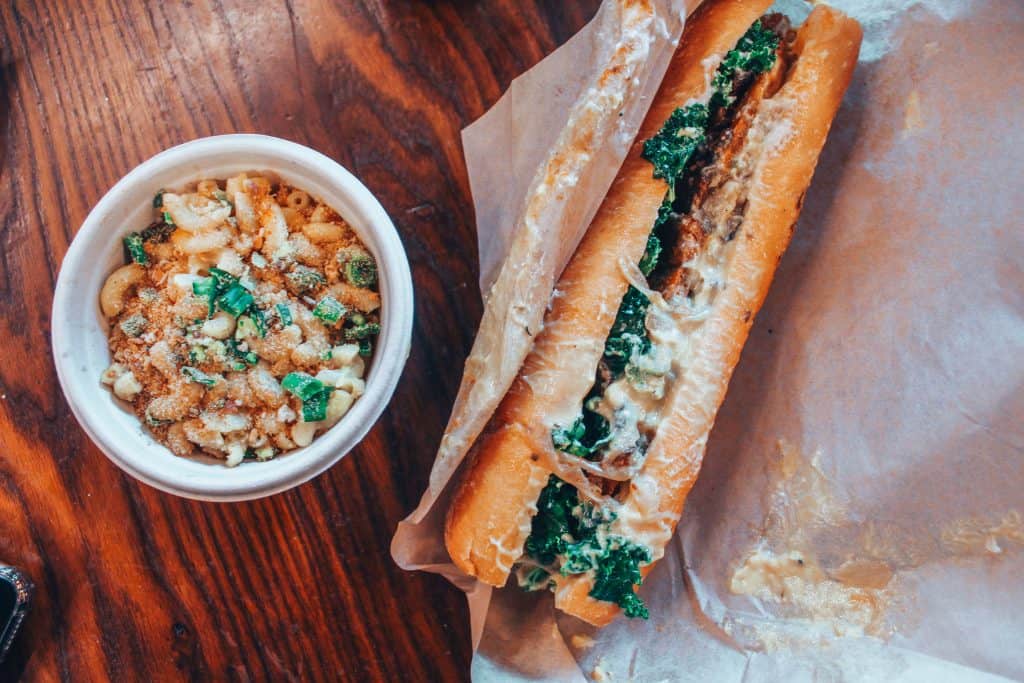 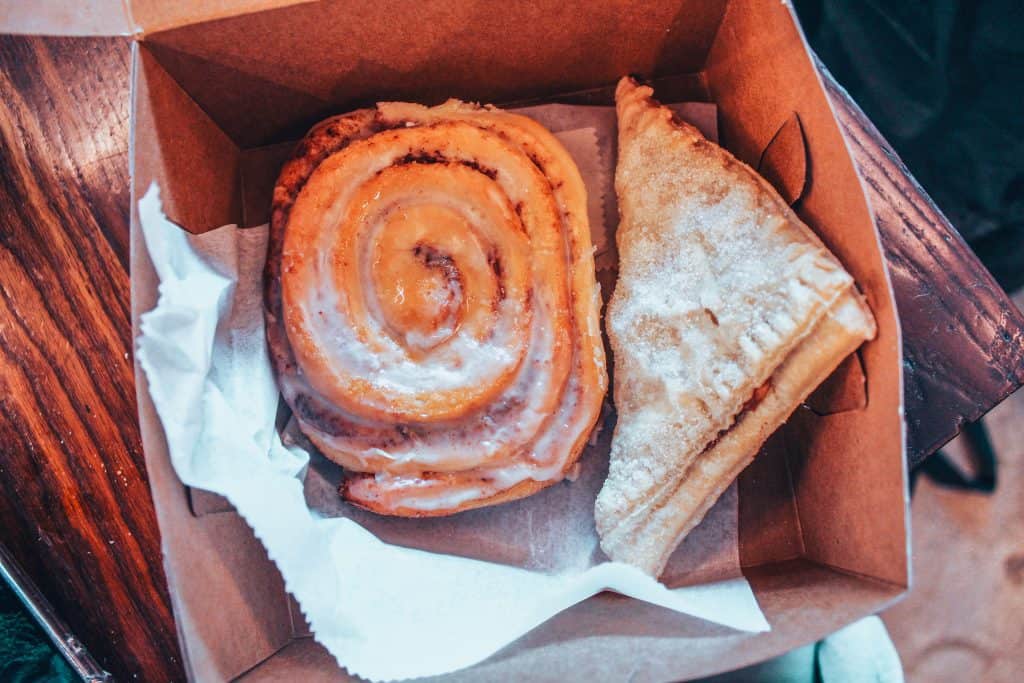 How fitting that my most loved instagram post was from my time in NYC. This was where I stayed – the HI NYC hostel!

I just recently got back from NYC where I attended the @nytimestravel show and explored the city I’ve always loved. I decided to stay at @hinewyork and I did this for many reasons. HI NYC has a lot going for it especially in the sustainable realm. ◃ ◃ ◃Why are hostels (especially @hiusa hostels) usually a more sustainable form of accommodation? ◃Shared spaces mean less resources, more interacting with others which leads for richer experiences and making friends all over the world. ◃ ◃ ◃Nearly all of HI hostels are in repurposed buildings. ◃Run by local staff. ◃Electricity is from wind power. ◃HI hostels offer free tours that dive into the history and culture of the city and often lead to “off the beaten path” activities ◃ ◃ Hostel culture leans towards using public transportation or walking, experiencing a place “like the locals” and packing lighter. ◃ ◃ @hinewyork specifically: ◃ has the largest private green space in manhattan. ◃ has a rapid in-vessel composting system. ◃ is Green Globe certified. ◃ Have you ever stayed in a hostel or would you? (hint: they aren’t all party hostels)

WHAT I READ, WATCHED + LISTENED TO THIS MONTH

I’m in the middle of reading a few different books but I didn’t get to finish anything in January.

PODCASTS I LISTENED TO

I finalized some plans for several BIG trips this year! This year is shaping up to probably be my best travel year ever.

In April, I’ll be traveling to Costa Rica for my first time ever. While there, I’ll be staying at a new eco-lodge for a few days and possibly getting my scuba diving certification! If you have any travel suggestions for Costa Rica, please send them my way! In August, I’ll be heading to Havasu Falls! I was one of the lucky ones to score my permit. I’m going solo and would love all the tips here too!

Also, I’ve changed over my social media handles to my new name! You can find me at @wild.hearted.blog on Instagram and @wildheartedblog on Twitter. Still working on Facebook and my URL will be changed sometime this month! It’s all coming together.

I was going to be headed to New Orleans at the end of the month but that got pushed to the end of March so I won’t be traveling anywhere this month aside from some day trips. Going to take this time to get a lot of work done and maybe, just maybe, ahead of schedule?

What Exciting Things Happened for You in January?