When you think of tiger tourism, you might remember the release of Tiger King last March. If you remember anything from the show, it might be Joe Exotic and his countless attempts to obtain and profit from big cats, including tigers. The conservation and animal welfare issues with Joe Exotic’s Greater Wynnewood Exotic Animal Park weren’t really shown in the Netflix original series.

That’s right, petting tigers and taking selfies with them might make you happy and possibly up your Tinder profile, but the damage to these big cats and the conservation of this endangered species could be irreversible. If you’re wondering how you can help and still observe tigers ethically, I’ve broken it all down here.

First, it’s important to remember that tigers aren’t actually snuggly animals in the wild like they appear to be in captivity. They are solitary animals, which unfortunately makes them a big gain for hunters looking for a trophy or to sell on the black market as body parts for traditional Chinese medicine. They’re elusive and scarce, making a sighting a lot more prized.

Tigers are also massive and the largest of all Asian big cats. There are around 3,900 tigers left in the world, according to the latest census. Female tigers give birth to two to four cubs every two years.

Tigers can be found in a diverse array of habitats, including rainforests, grasslands, savannas, and mangrove swamps. But, the habitats available to tigers are diminishing, with about 93% of historical tiger lands having disappeared. Land once inhabited by tigers has been diminished due to the expansion of human activity.

Why are tigers endangered?

The four biggest threats that endanger the tiger species include poaching, hunting, tourism and palm oil.

There are two main tiger tourism activities: petting tigers and tiger selfies. Both of these are extremely damaging to tiger conservation.

In most cases, the tigers used for petting experiences are cubs that have been speed bred and removed from their mothers too soon. The constant flashing of camera lights can cause early cataracts in early developing eyes, and human interaction can also expose cubs to diseases. Young tigers often sleep during the day in the wild but often miss that chance in captivity. Usually nocturnal in the wild, they are forced to sleep in the evening. Once they grow past the age of petting, they are often sold on the black market for parts.

Remember when a bunch of men started using photos of them with tigers in their Tinder profiles? Yeah, that’s not cool. Most, if not all, of the photos taken like this are taken with a tiger that has been drugged to sit still. And when the tiger isn’t putting on a show for the selfie, it is caged alone.

Not only is a tiger selfie intentionally supporting this behavior from handlers, but also encourages the mistreatment of animals and implies that they only exist to serve humans’ entertainment.

Tiger tourism – where to see tigers in the wild

Tigers can be found in swamps, grasslands, and rainforests, meaning you can see a tiger in the wild in a variety of countries. From the Russian Far East to parts of North Korea, China, India, and Southwest Asia to the Indonesian island of Sumatra, there’s a chance you could see a tiger or two.

Madhya Pradesh is known as India’s “Tiger State” and is one of the 50 reserves in the country. There is one walking safari, the Satpura reserve, and all other safaris are conducted in Maruti Suzuki Gypsies (or Jeeps). You can book a safari ride for morning, afternoon and sometimes evening with the right local guide.

It’s suggested that you take at least four rides for the best chance to see a tiger. But, even if you don’t catch a tiger, there’s a good chance you’ll see other wildlife like deer, owls, eagles, gaur, langurs, macaques and if you’re lucky, a sloth or jungle cat.

For the most luck spotting a tiger, visit during the pre-monsoon months of April and May.

The Barcadia National Park is located in the remote northwest of Nepal, and it’s the best spot to see one of the 80-odd tigers that call it home. Each lodge in the national park offers walking and 4WD safaris and while you can cover more ground riding around, you experience intimate wildlife viewings by walking.

In addition to the chance of seeing a tiger, you can also see rhinos, otters, crocodiles, wild elephants and five species of deer.

Although the Barcadia National Park is open year-round, the best times to see them would be the hot season by the river.

The Sundarbans straddle India and Bangladesh and is the world’s largest mangrove forest. Although both sides are an adventure, The Sundarbans is better accessed from the Bangladesh side, where you’ll find deeper access and maximize your chance of seeing a tiger.

To get to The Sundarbans, you hop aboard a multi-day boat tour from Khulna. Eating and sleeping occurs on the main tour boat, but you break into smaller groups and track tigers on foot or by smaller boats.

You’re most likely to spot a tiger in April and May, even though visiting in October through March may be more comfortable. In addition to tigers, you can also spot saltwater crocodiles, wild boar, langurs and many of the 260 bird species in the region.

The Siberian tiger is found primarily in eastern Russia and northern China. Russia became the first country to grant full protection of tigers in 1965, and that act saved them from extinction.

The chance of spotting a tiger is pretty rare, though, and most tours are run like citizen science projects where guests spend their days tracking pug marks and snowmobiles and on foot. While tracking pug marks, you’ll set camera traps and review footage, all in contribution to the protection of the species.

In addition to the slim chance of seeing tigers, you can also see wolves, lynx, badgers, foxes and raptors, and in the summer you may even see an Asian black bear.

For the best conditions to track tigers, visit during the month of November through February.

Ranthambore National Park is 154 square miles of space where tigers can be found roaming freely through the park. The park is composed of dry deciduous forest, brushland, rocky hills and some of the most beautiful ancient structures.

A fixed number of vehicles are permitted in the park for tracking both morning and afternoon. 40 gypsies and open-sided canters embark on tracking sessions each day. In addition to seeing tigers on the drives, you can also see deer, wild pigs, peacocks, leopards and sloth bears.

The peak months to visit are between October and December.

Kerinci Seblat National Park is the largest national park in Sumatra and has some of the healthiest populations of Indonesian wildlife like elephants, bears, tapirs, clouded leopards, gibbons and more tigers than can be found in all of Indonesia.

But, it won’t be easy to spot a tiger. Many visitors to the national park embark on the climb to Gunung Kerinci, which is the highest active volcano in Southeast Asia. You might see a tiger on your climb if you’re lucky, but do know it’s rare.

Chitwan National Park was the first national park in Nepal when it was founded in 1973. Before it was a national park, Chitwan was prime hunting grounds. Talk about a glow up.

In 1984 it became a UNESCO World Heritage Site and is currently protected by the Nepali Army.

You can hop on a jungle safari or join a jungle walk for a chance to see a tiger in the wild. In addition, you could see wildlife like birds, deer, rhinos, crocodiles and monkeys.

How to help tigers 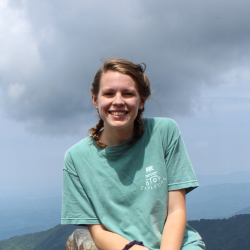 Kylie Hubbard
Kylie Hubbard graduated from the University of Tennessee with a degree in journalism in December 2019 where she was the Editor-in-Chief of The Daily Beacon, and has worked with various organizations in Knoxville and Nashville, Tennessee through writing, design, communications and marketing. Kylie loves sharing stories, and spending time outdoors.

Kylie Hubbard graduated from the University of Tennessee with a degree in journalism in December 2019 where she was the Editor-in-Chief of The Daily Beacon, and has worked with various organizations in Knoxville and Nashville, Tennessee through writing, design, communications and marketing. Kylie loves sharing stories, and spending time outdoors.

A Vegan Guide to Indianapolis, Indiana

Galapagos Itinerary: Which Islands, Beaches, and Places to Visit?