Cooking Our Way Around the World : Afghanistan 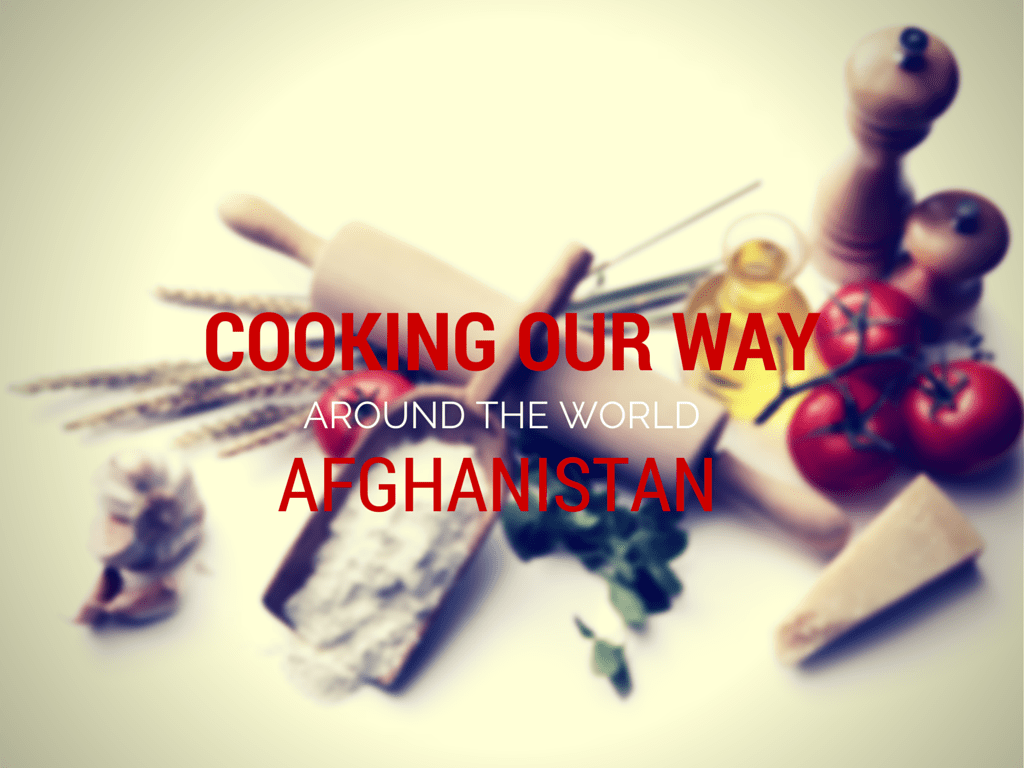 This is my very first country in my ‘cooking our way around the world‘ challenge I’ve declared for Kaleb and I.  Inspired by Global Table Adventure, I’ve decided to do a similar challenge – often using some of the same recipes, but also finding different ones along the way.  Depending on work schedules, I’m planning on doing one country weekly or bi-monthly.

Since I’m terrible at making decisions, I decided to just go alphabetically.  If I hadn’t put some order to the countries, then I’d be spending an entire week just picking the next country.  With that being said, Afghanistan is first!  And, I’d be lying if I said I wasn’t intimidated to be starting with a country’s food that is nothing like what I’m used to cooking.  While intimidating, it’s also very exciting though!

For the first country, I decided to go with all the same recipes (they all looked amazing!) that Sasha did except I was going to make these Afghan pistachio cookies I found a recipe for.  Unfortunately, there was one single ingredient I couldn’t find for it (soft icing mixture?!) and so I decided to do the same dessert as well.

I should have started cooking in the morning because I was, rushed, in the kitchen five hours – meaning dinner was ready about 2 hours later than I originally intended.  In five hours, I had to endure smelling all of the amazing spices and looking at all the food has it gradually finished and not get to eat any of it.  By the time I was done and everything was on the table, I fear my hunger was pretty much gone.  That seems to happen a lot to people who spend a long time preparing a meal – you’re just not hungry when it’s done.

That didn’t stop me from sampling everything though and I have to say…I was pleasantly surprised!  I won’t lie – I was expecting to not like a good portion of this.  The dessert had me unsure as all I’ve ever heard about rosewater is that its super strong and tastes like perfume.  I thought the spices in the rice would be so overwhelming that I wouldn’t know what to think.  And, I was completely unsure about the mint sauce for the eggplant.

Noni Afghani – the bread is to die for.  I could eat this at every meal and it was SO easy to make.  It’s definitely going to be a staple for our house.  And, it’s so much better than the stuff you can buy in the stores. 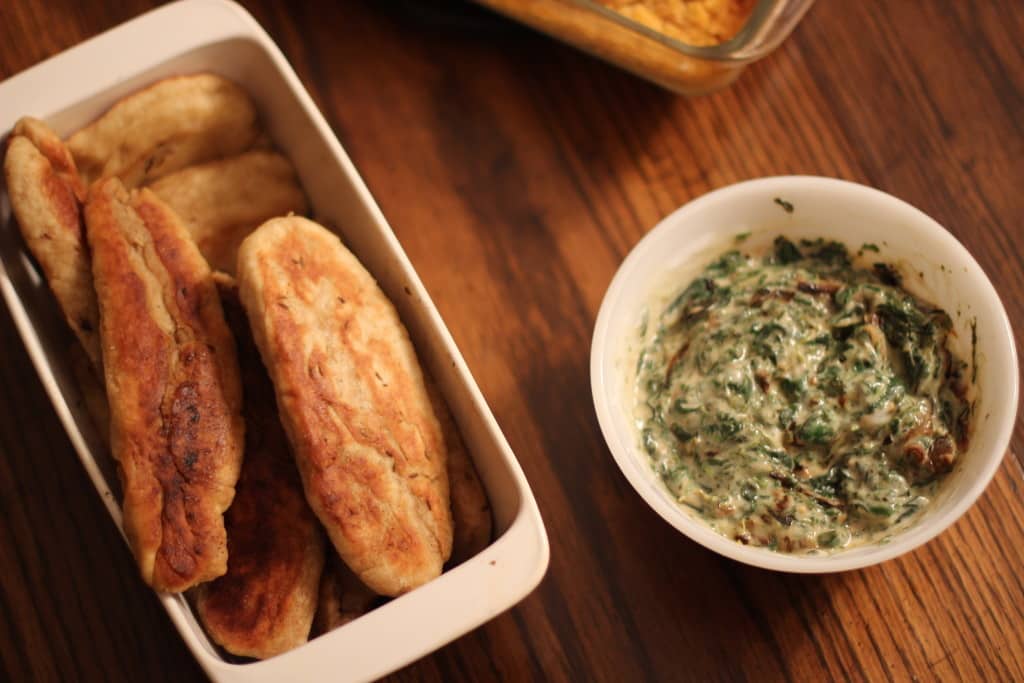 Kabeli Palau – this is a popular dish in Afghanistan and I can see why.  I really, really loved it!  Also, I had no idea this recipe was going to make as much as it did – it made TWO of the casserole dishes you see in the picture.  Looks like its Kabeli Palau errrrryday this week! 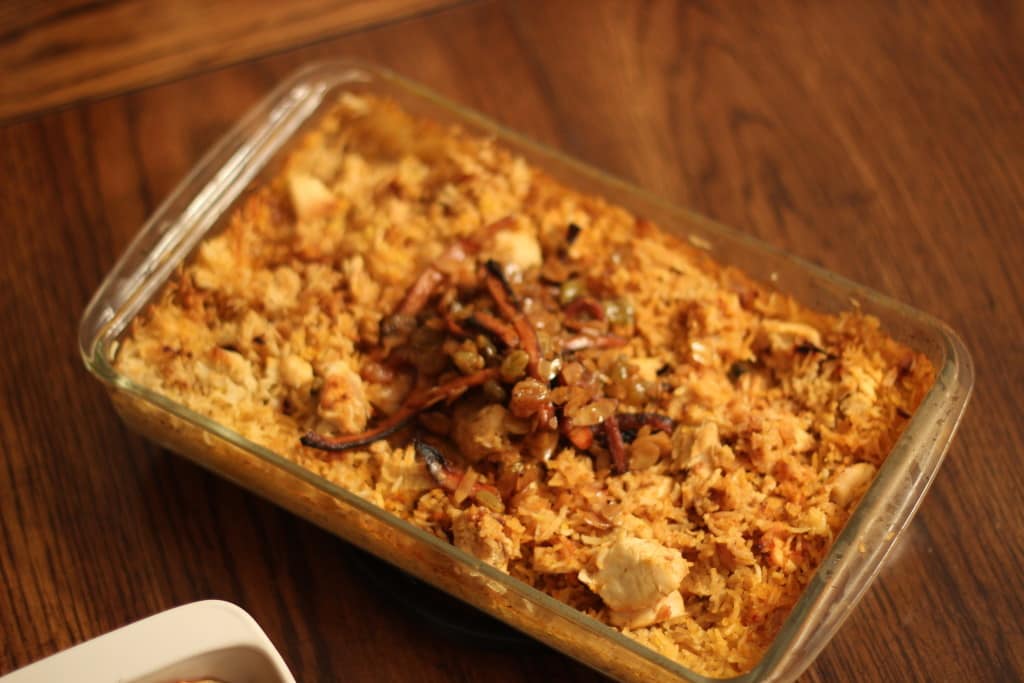 Firnee – the thing I feared most, I actually really really liked!  My family thinks I’m insane but I thought it tasted like fruit loops…weird, I know.  The rosewater was not too strong AT ALL.  I didn’t feel like I was eating perfume.  And, the pistachios were such a great compliment to the rosewater and cardamon.  I see why these are the go-to trio for Afghan desserts. 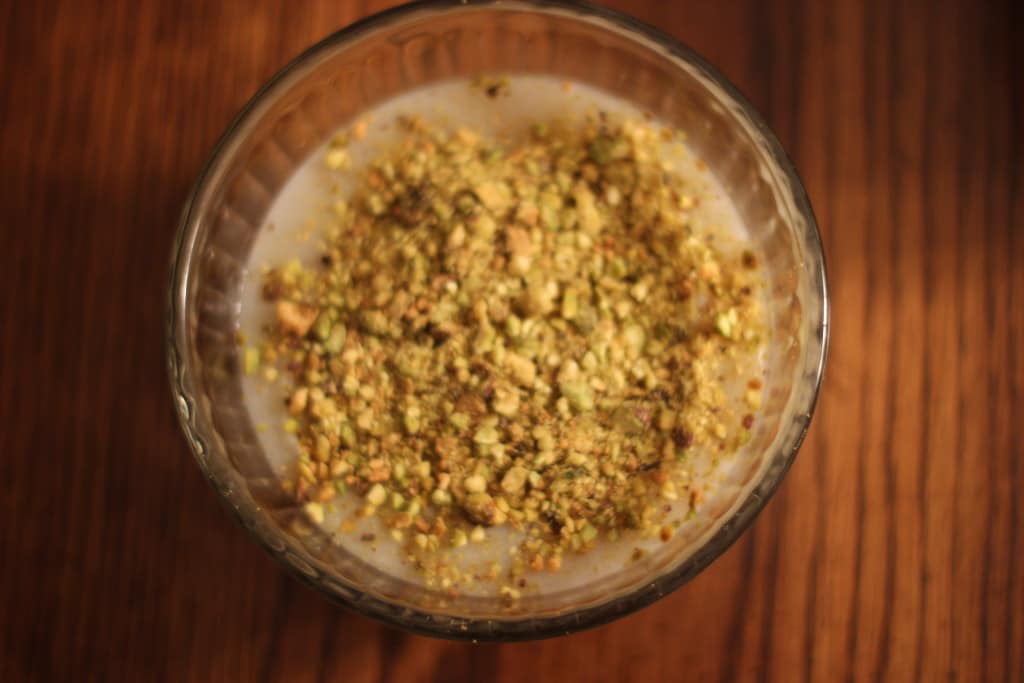 Before I say anything, nothing at all was bad about this meal.  It was all very good – just I really enjoyed some things (see above) way more than others.

Burani Bonjon – the eggplant dish had a fantastic flavor. I had skipped an optional step in the recipe due to time.  It basically was to take out the bitterness of eggplant and I wish I had done it.  I enjoy eggplant but I think it would have been that one thing it needed to take this dish to the next level for me. 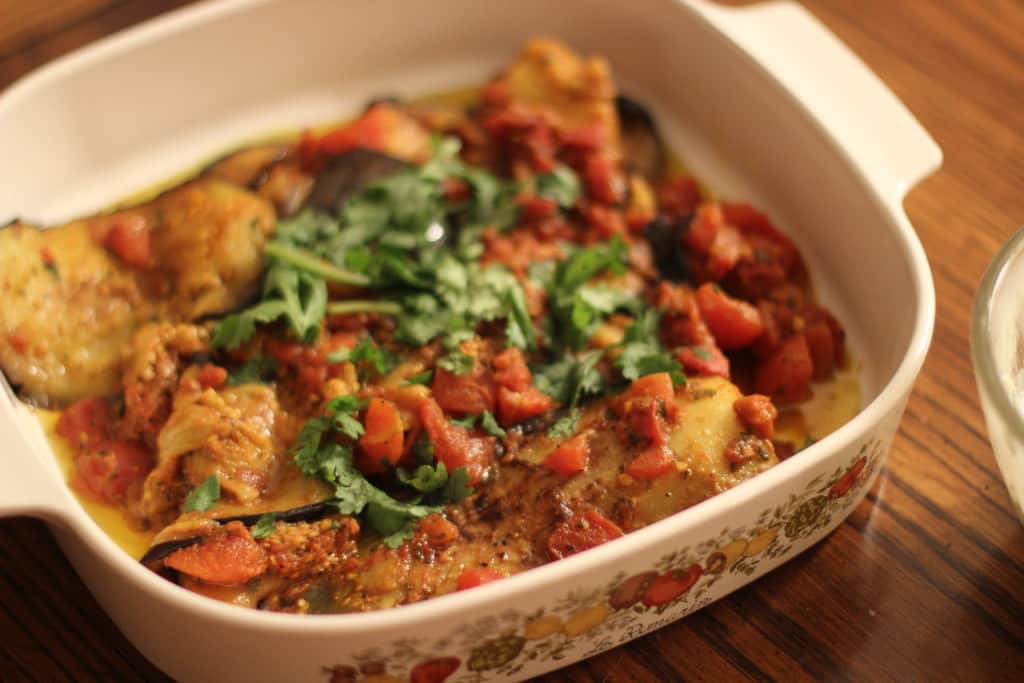 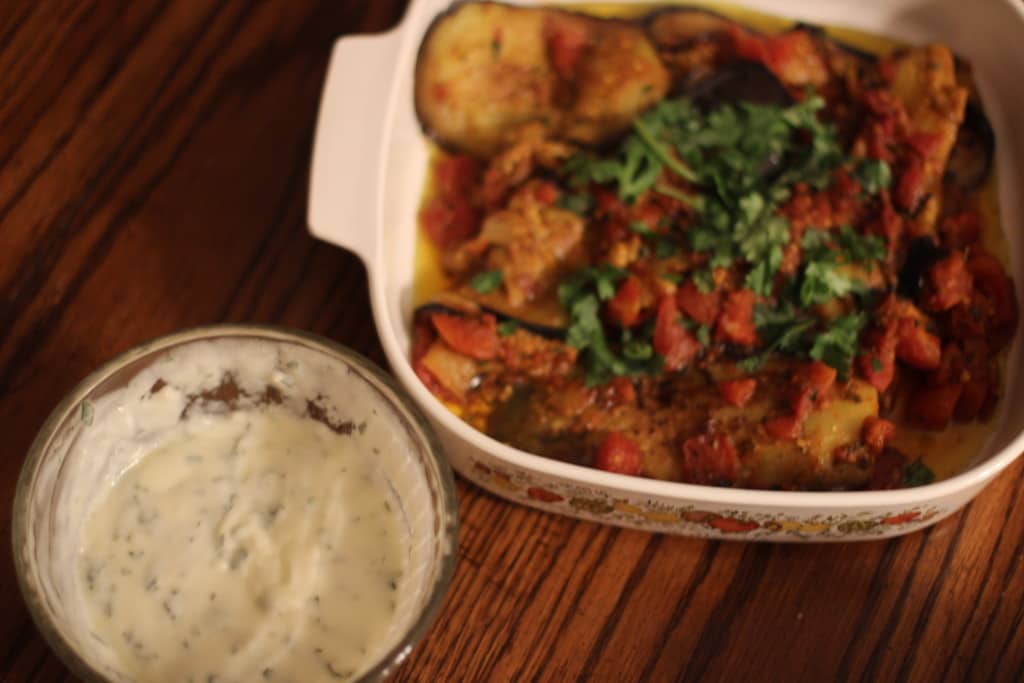 Mint Sauce – the lemon garlic mint sauce for the eggplant was INTENSE.  Not bad, just intense.  Still trying to figure out what I think about it.

Sabse Borani – the spinach yogurt dip had a great taste.  I kept thinking it was going to be hot (spinach dip) and so I think eating it cold was just straight up confusing me on how I felt about it. 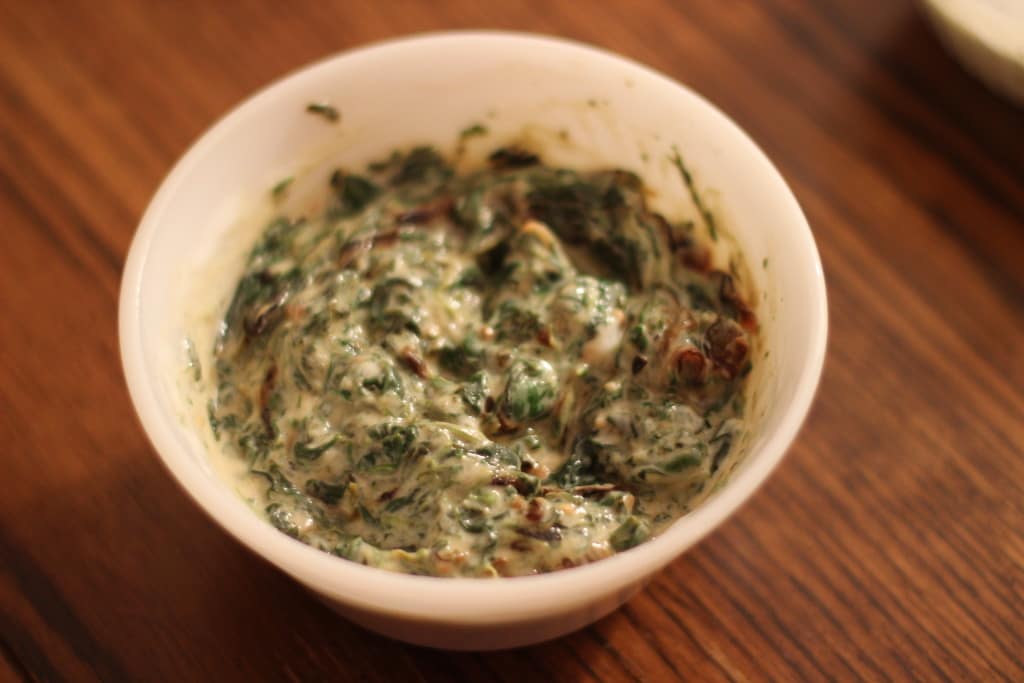 Where to find the hard-to-find ingredients for this meal:

Rosewater : I searched for rosewater EVERYWHERE.  Kroger, Publix and Walmart are all a no-go.  Whole Foods had a spot for it in the essential oil section but were out of stock and it was $10.

So, where to find it?  I then went to an Indian market (that I actually didn’t know was like 5 minutes from my house, shame on me).  And, there it was – just sitting on the shelf mocking me.  I take it to the register and the cashier tells me it’ll be $2.59.  WHAT?!  I know where I’m doing my shopping now.  So, definitely try your international, Indian or Middle Eastern markets first.

Garam Marsala : Once I saw it once, I saw it everywhere.  I had a hard time finding this spice at first in the spice aisle but it is indeed at most grocery stores.

Whole Cumin : you can find ground cumin everywhere.  But, whole seeds were no where to be found at Publix, but I did find them at Kroger so I suppose its just a luck of the draw on your local grocery store.

Saffron : Saffron is available at most grocery stores in the spice aisle but it is EXPENSIVE!  And, it’s also in a small container so I looked at the spice for like 30 minutes before seeing it right in front of me.  The equivalent of probably a tablespoon was $6 at Publix.  This was surprisingly MUCH cheaper than Kroger, where it was $20!

So, there it is!  I survived cooking Afghan food and everyone loved it!  What did you think?  Would you give it a try?!

Latest posts by Ashley Hubbard (see all)
Tags: AFGHANISTAN, COOKING AROUND THE WORLD

Everything You Need to Know About Tiger Tourism

16 Shark Facts to Change Your Perception