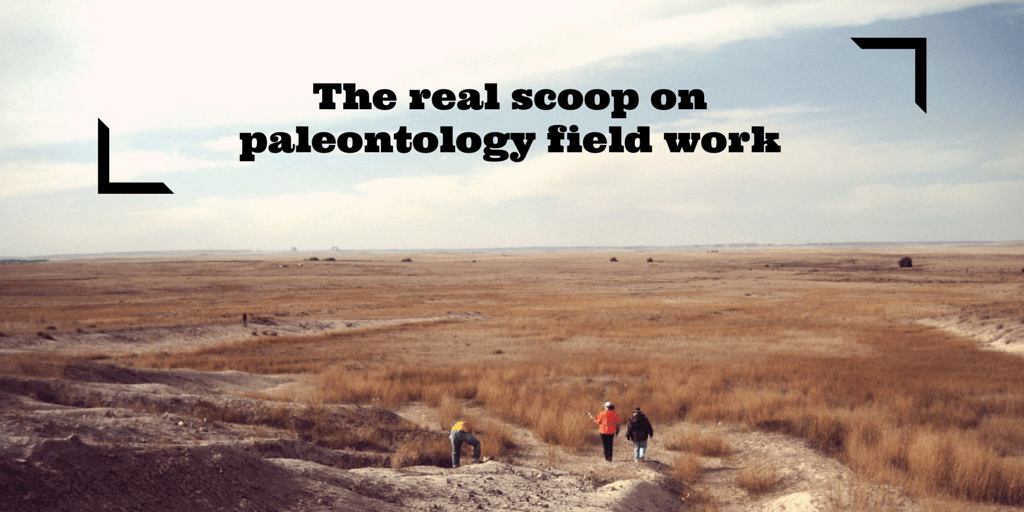 The moment I step off the tiny prop plane in Jackson Hole, Wyoming, the moisture in my mouth is gone.

The high desert heat multiplies that moisture elsewhere in my body.

I was seventeen, and alone.

Why the hell was I doing this again?

Ah. That’s right. I wanted to try field work, and I wanted to challenge my anxieties. I had a lot of those, and this was a super intimidating combination of all of them.

Aloneness. Isolation. Independence. Plane rides. Fear of being unable to do what you want to do.

But I was determined, and so I spent those two weeks in Wyoming, camping in the wildly beautiful and untamed National Elk Refuge. I dug for bison bones and learned about the impact those animals had on native nations 800 years ago.

It was exhilarating and exhausting and I got through it by listening to the Jurassic Park soundtrack on repeat, in the chill of my tent and in the endless Wyoming dark.

And in spite of all my hesitations, I was hooked. 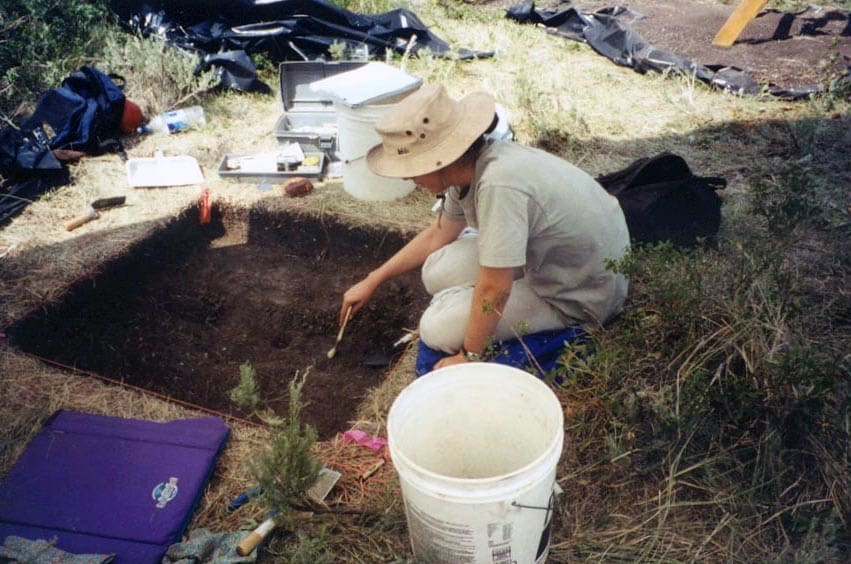 Paleontology versus Archaeology: Jurassic Park matches up against Indiana Jones!

Fast-forward fourteen years later. As I write this, I’m a trained science educator with a graduate degree in how museums catalogue and take care of vertebrate fossils. I took my love of travel and total geek-out penchant for paleontology to several spots around the United States before settling on a degree that gave me a deep background knowledge in animal anatomy, fossil analysis, field work, and what goes on behind the scenes at museums.

Plus, I got to study dinosaur poop. Specifically, fossil droppings from a likely bunch of T. rex-like animals.

Now, that was a fun thing to explain to my parents!

Something that both paleontologists and archaeologists alike get asked is, well, what exactly is the difference between the two? Are they the same?

Many of you reading this may already know the answer, but to save a little confusion let’s lay out the definitions.

Paleontology is the study of ancient life. That can include ancient humans and their impact on ancient plant and animal life, but generally human studies are the realm of archaeologists. Paleontologists study bacteria, worms, trilobites, fossil footprints, fossil droppings, vertebrate skeletons, and pretty much anything but humans.

Archaeology is the study of ancient human remains and cultures. That trip I had the great fortune to go on when I was in high school? That was an archaeology project, even though it involved bison bones. The study was supposed to figure out if and how humans hunted and consumed these animals.

Even though I got my tenderfooted start doing archaeological field work, I had written my Earthwatch scholarship essay–the thing that got me there in the first place–on paleontology. I guess the team behind the scenes thought the bison dig would be a good next best thing, and I’m glad I had the opportunity to embark upon such a crazy journey as a young person.

As a travel writer and science educator with a paleontology education, I can honestly say that my first field experience molded the course of my future in many ways.

What should I know about digging up fossils, and how can I get involved?

Scientific field work has the ability to enhance and expand our communal knowledge of the past, and of the natural history of our planet. It’s an incredibly powerful tool, and there are plenty of ways in which everyday folks can get involved in field work.

It’s really important to emphasize that if you do find a fossil someplace, or even find a suspected fossil, please contact your local museum or university to help take care of it.

Picking up fossils without meticulously recording where they are found and what type of rock formation they are associated with will destroy much of the important scientific information that goes along with the remains. It’s always best to get in touch with someone who knows how to collect and study the fossils you find.

There are many laws, especially in the U.S. and Canada, that help protect vertebrate fossils–those from animals with backbones–that are found on state, provincial and federal lands.

That being said, there are plenty of museums and institutions that take the guess work out of the equation, and can bring you on a fossil dig that will teach you where to dig  how to do it. Fossil digs that we recommend at Outbound Adventurer are always vetted and scientifically responsible, so fossils end up in the public trust for future display or research. It doesn’t do anyone any good if vertebrate fossils are stuck in a shoebox in a closet.

Invertebrate fossils, or those without a backbone, are a different matter. There are certain rules about collection on public lands, but the Paleontological Resources Protection Act outlines the procedures for all paleontological resource collections in the United States.

Yep, it’s just a little light reading. But it’s an important piece of legislation to help protect fossil resources, and other countries have similar laws and rules.

Once you’re out in the field, the electric charge of discovering something that hasn’t seen the light of day in millions of years, and the thrill of adding to scientific knowledge?

There’s absolutely nothing like it, and if done responsibly it can be one of the most memorable and impactful experiences you could have.

What’s it like to be in the great outdoors, traveling, and conducting fossil field work?

It’s a really great question, and I’d like to answer it by first saying it really depends on the kind of field work you’re conducting.

These don’t even begin to scratch the surface in terms of the variety of locales and research topics available to field scientists in paleontology and archaeology.

But let’s take a trip through some of these experiences, and hopefully you’ll get jazzed about one or two of them!

The Tate Geological Museum is a tiny but awesome little place associated with a community college in Casper, Wyoming. With their super team and a couple of other volunteers, I helped excavate parts of a duck-billed dinosaur (Edmontosaurus), a stegosaurid dinosaur, and fragments of Triceratops bone. We stayed in a hotel, so it felt a little less like true field work, but it was an awesome experience and I highly recommend contacting them if you’re looking for an inexpensive field dig. 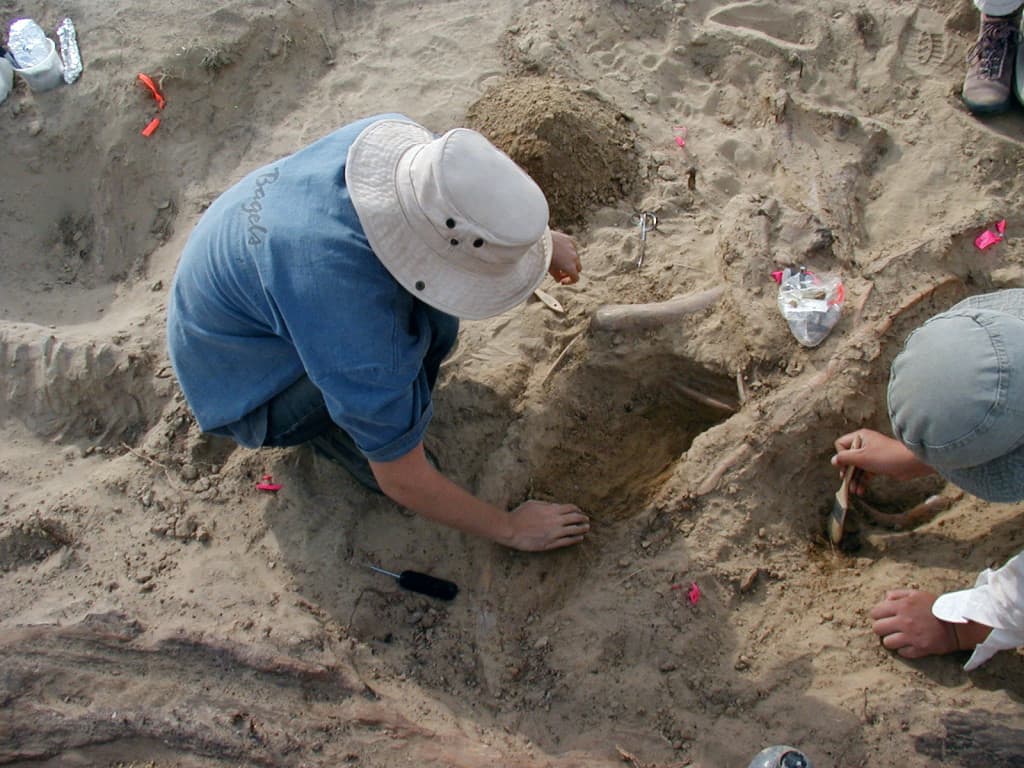 In college I got to work on mapping a number of dinosaur footprints at a site in beautiful western Massachusetts. The cool thing about this site was that I could tell a bit about how fast the dinosaurs were walking. Turns out they were going pretty slowly, no more than 2 or 3 miles per hour, probably because they didn’t want to slip and fall on what was then a slick and dangerous mud flat next to a lake. 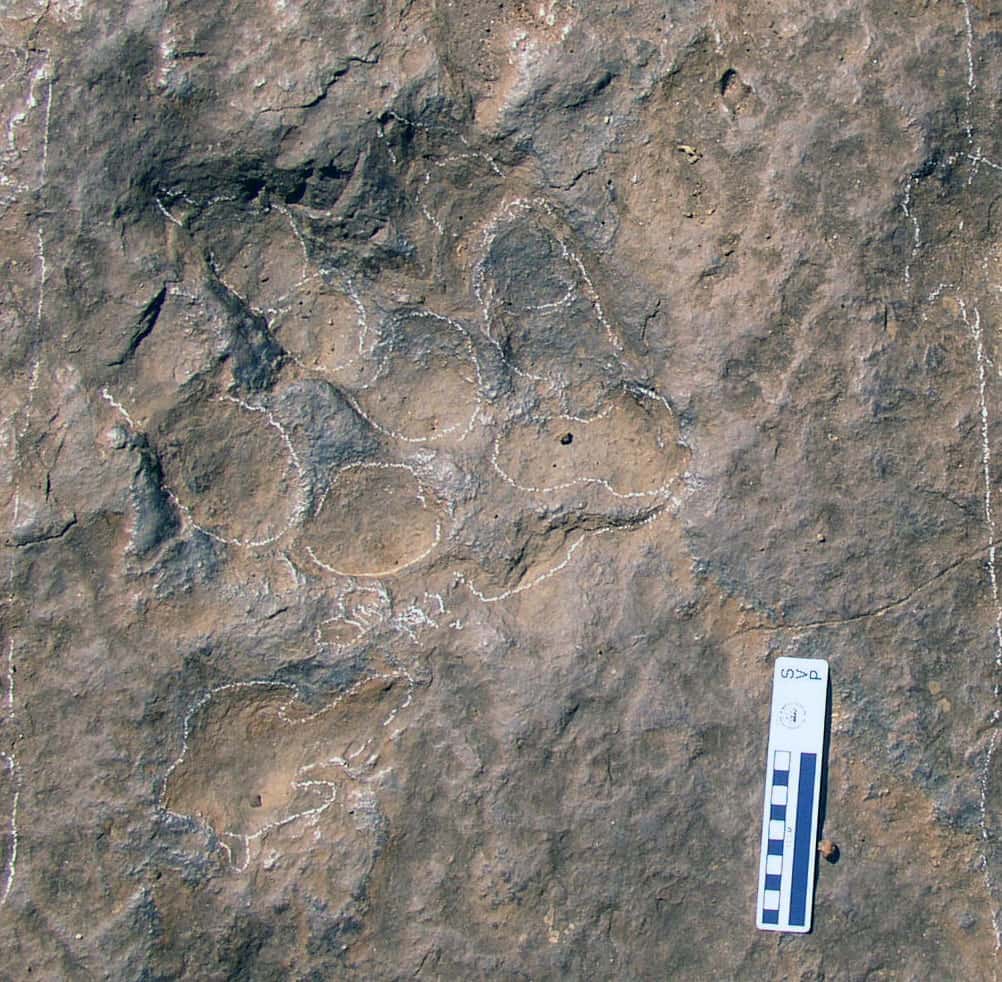 This indoor dig site and museum is a great attraction in the Black Hills, close to Mount Rushmore and Custer State Park. I gave tours here and got to help supervise volunteers as they dug carefully through the dirt of an Ice Age sinkhole. This deep and soggy trap was the doom of a number of unfortunate young male mammoths, who couldn’t escape the slippery sides once they were lured in for a drink of water. 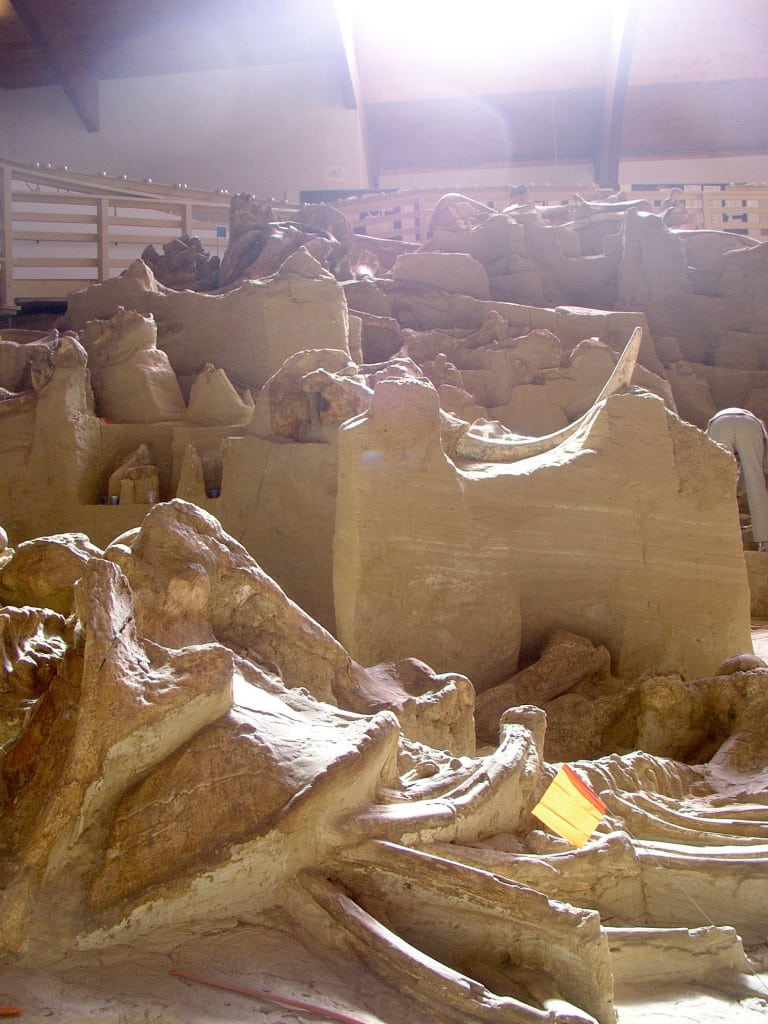 Dinosaur Coprolites in the Laramie Formation of Colorado

For my graduate work I ran around the Front Range of Colorado, near Denver and Boulder, where I mapped and collected dinosaur droppings–also known as ‘coprolites’. The coprolites were chock full of ground up pieces of bone from herbivorous animals. Plus, the strange way the coprolites were preserved helped them absorb lots of other neat impressions, like leaves, swirls and possible muscle tissue imprints. 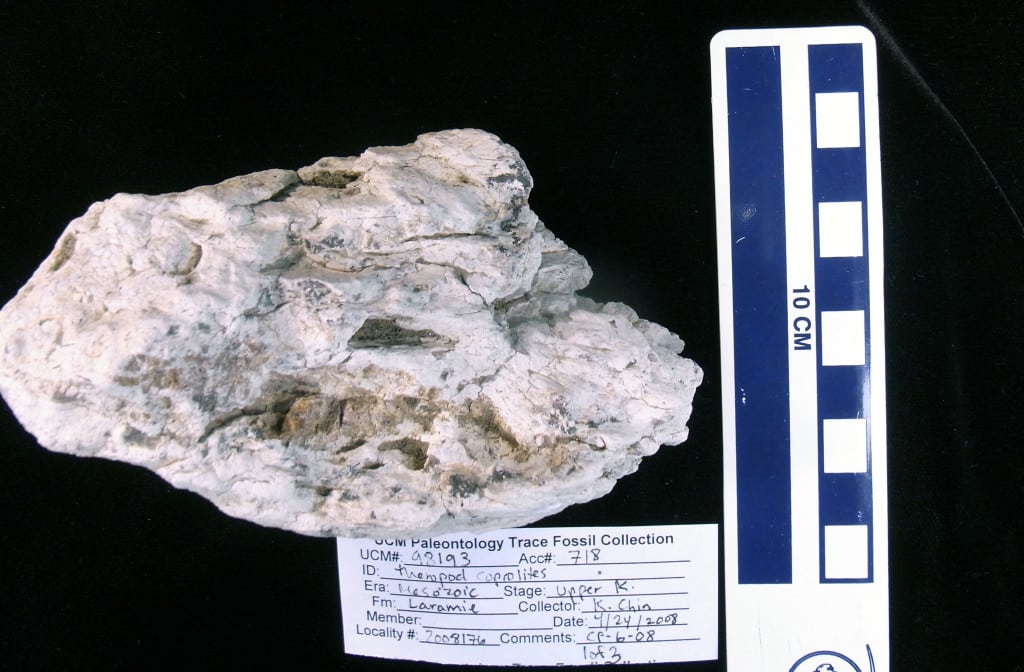 Even though I wasn’t camping during the duration of this field work, my time in Colorado was the first experience I’d had with traditional burlap-and-plaster jacketing of a fossil. In short, it means getting your hands dirty to help wrap and protect fossils for transportation. One of the fossils we collected during my non-coprolite studies was an ancient turtle shell from a reptile the size of a Mastiff dog. 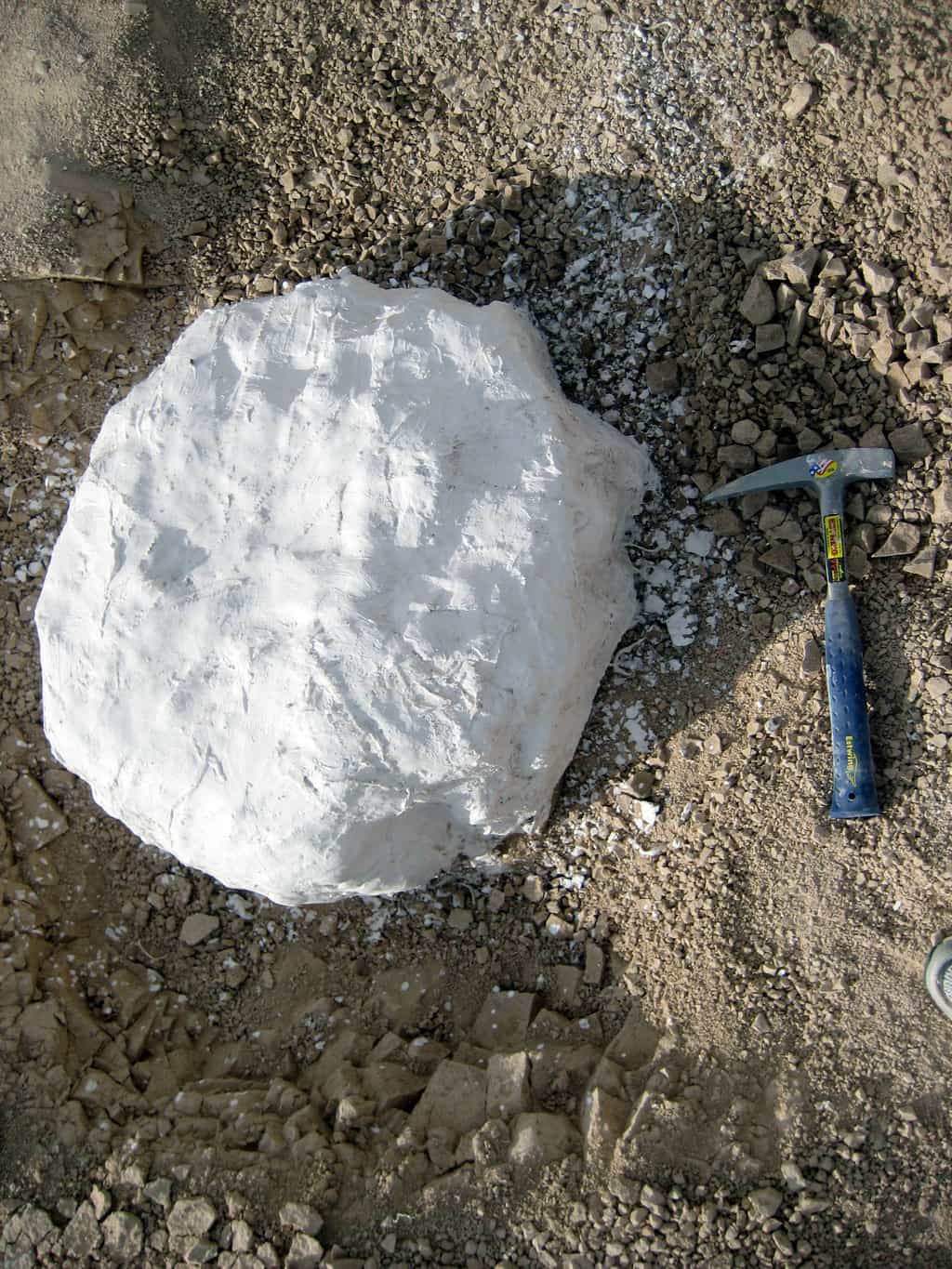 This small national monument in remote western Wyoming is a fantastic place to take your family. There is a small dig site that allows visitors of all ages excavate, identify and record information about fossil fishes and plants. I operated this dig site with my fellow interns, and helped children and adults alike experience the thrill of scientific discover. Super fun, and super inexpensive to try your hand at paleontology. 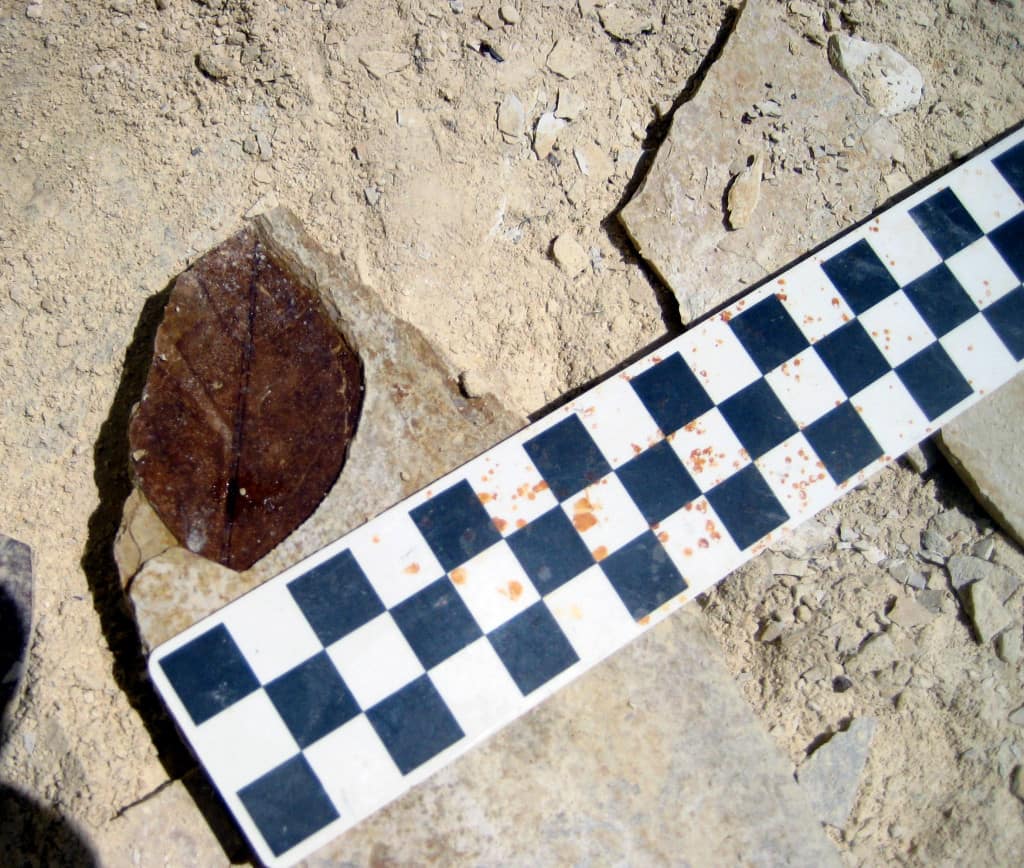 While in Houston I joined Jessi and her colleagues on a trip to the outskirts of Dallas, where we found fossil shark teeth from an ancient ocean that once split North America in half. That’s right–Dallas was seafront property! These specimens were collected for the education department at the museum. 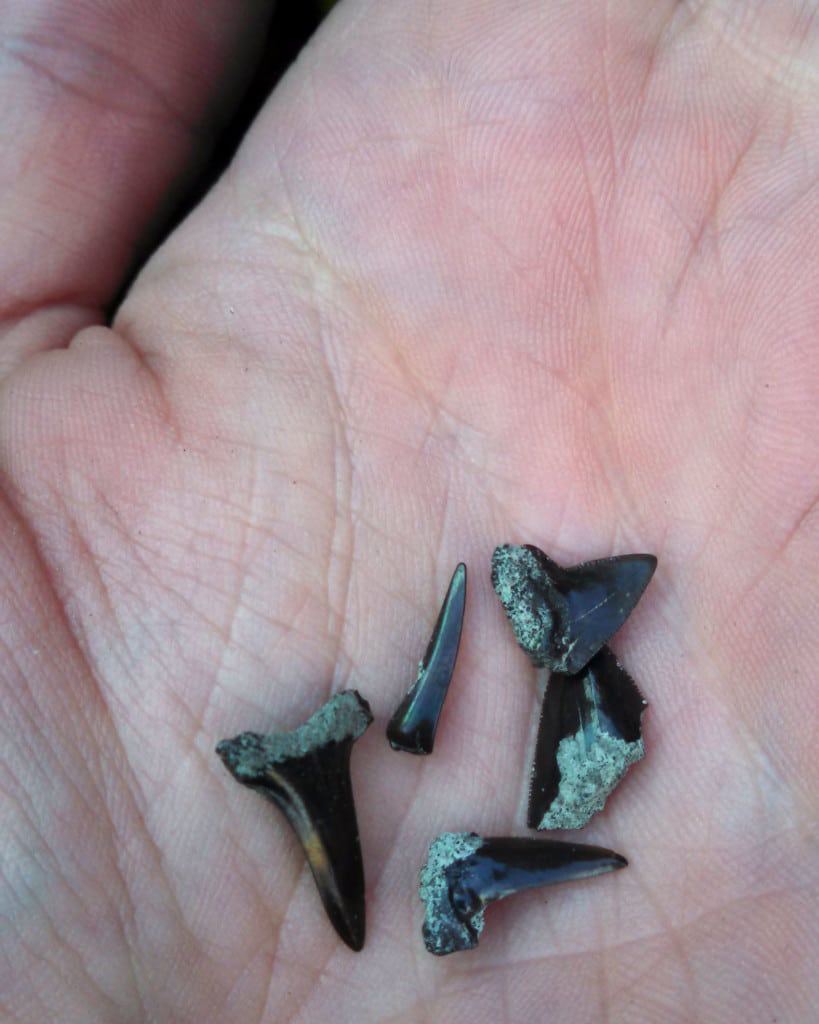 If you’re familiar with the popular TV show, you know what I mean. One of the things paleontologists are often asked is whether they relate to the paleontology character on Friends.

First of all, kudos to network TV for putting a paleontologist on a nighttime sitcom. That said, I can tell you that no paleontologist conference has ever been held in the Caribbean. At least, not to my knowledge (although last year they did host the annual Society of Vertebrate Paleontology conference in Berlin). Paleo friends, please correct me if I’m wrong, and let me know where I can sign up for tickets.

In spite of the differences between reality and real-life paleontology, I really do admire the science presence in popular culture. It helps make tough topics relatable, and reminds us all that scientists are just like everyone else–foibles, anxieties, and all.

Why is scientific field work such an important part of the world of travel?

Scientific work goes on around the world, and there is no better way to challenge your boundaries and contribute to global knowledge. Travel excites us and awakens our thirst for knowledge, whether we’re seeking out new cultures and countries or advancing the boundaries of human knowledge.  If you’ve got an adventurous spirit, and a little courage to jump into the field and get your hands dirty, you’ll enjoy paleontological or archaeological field work.

Teenaged me would approve, dry, dusty weather and all. 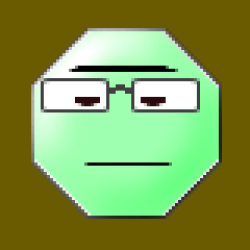 Tara Lepore
Tara, half of Outbound Adventurer, is a travel blogger and a science teacher with training in museum paleontology. She loves sharing her passion for education and travel with students, readers, and adventurers of all ages.

Sustainable Fashion and Why You Should Care