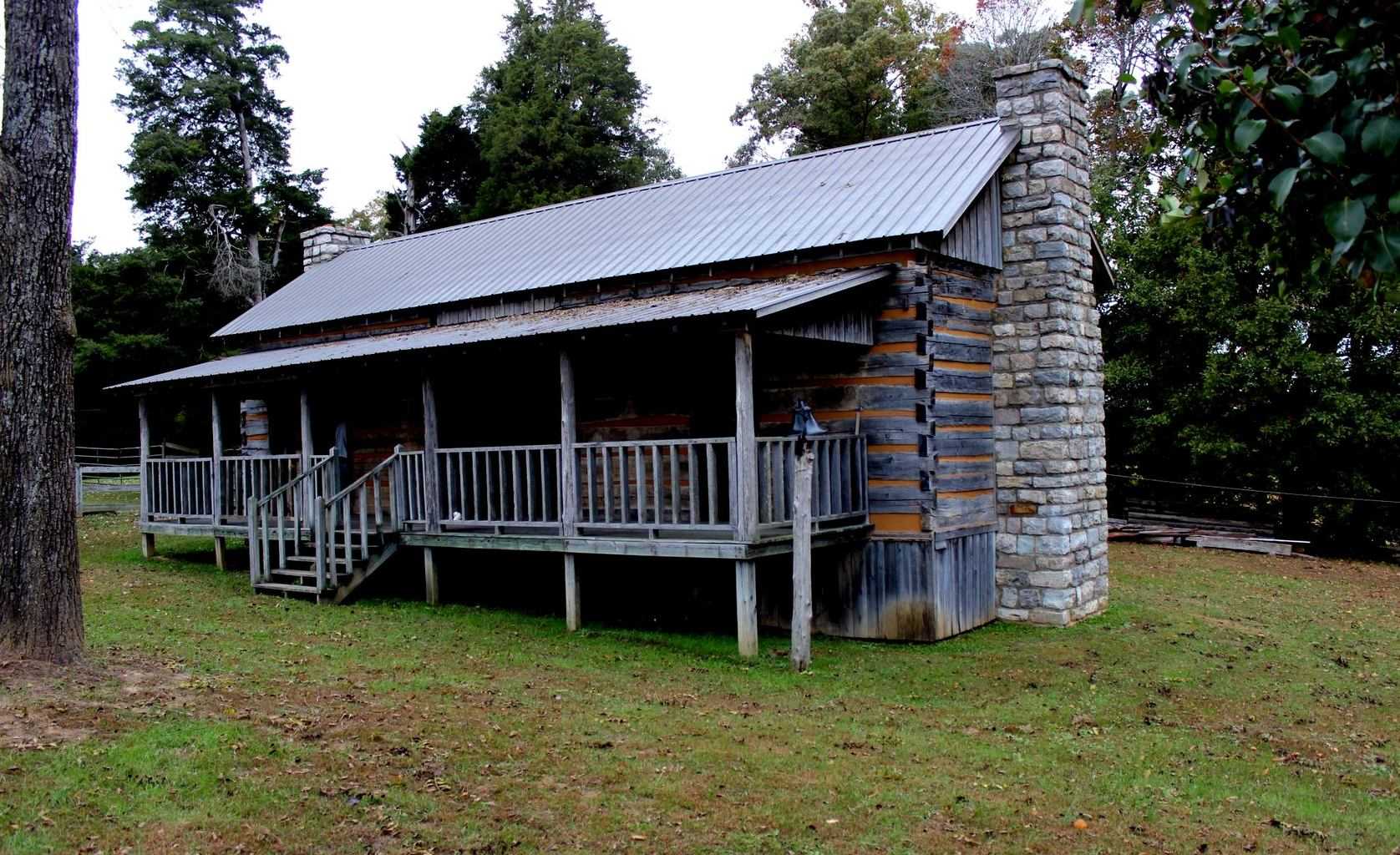 Growing up in Tennessee, the story of the Bell Witch was actually taught in schools.  In 4th grade, a good part of the syllabus is about Tennessee history, this being a part of that.  I vaguely remember what exactly they taught us, but last weekend I set out to finally go visit the Bell Witch Cave myself.  If anyone has seen the movie, “An American Haunting,”  it was based off of the Bell Witch, but only accounts for one the many explanations of what happened on the Bell land in the 1800’s.  While it’s not necessarily a bad film, you really shouldn’t rely on it for the true story.

So the story goes…

The Bell family, headed by John Bell, moved from North Carolina to Robertson County, Tennessee in the 1800’s.  At the time, this community was known as Red River, but is presently known as Adams, TN.  It all began in 1817 when John, while inspecting the fields encountered a strange-looking animal, with the body of a dog and the head of a rabbit.  He didn’t really think anything more of it until other strange things started happening.

Not long after, the Bells began hearing beating sounds on the outside walls of their log cabin.  The frequency and force of these sounds grew and at a rapid pace.  Each time, they’d run out of the house but there was never any sign of anyone or anything.  Soon, the noises started happening inside of the house.  The children would complain of a gnawing sound on their bedposts, almost like a rat was chewing away at it.  The children also complained of having their covers and pillows ripped from their beds while sleeping.  Other sounds they regularly heard were that of chains being drug through the house, stones being dropped on the wooden floors, and choking sounds.  John Bell and Betsy, the youngest daughter, took the majority of the encounters with the entity.  Betsy began experiencing physically brutal encounters.  Her hair would be pulled and she would be slapped so hard that it would leave welts and hand prints on her body.

While the entity very openly despised John, she simply only berated Betsy for one reason: she wanted her to break off her engagement to Joshua Gardner, a young man who lived near the Bells.  For an unknown reason, the Bell Witch was not pleased with their engagement.  Betsy refused to break it off for a very long time, but eventually had enough and followed her wishes.  Besides breaking off Betsy’s engagement, the other main reason the bell witch haunted the family was to kill John.  His throat would swell and he would have twitching and jerking of facial muscles.  Over the years, John became weaker and weaker.

As the entity’s frequency and force grew, the noises soon grew to voices.  It sang hymns, quoted scripture, and carried on extremely intelligent conversations with the Bell family.  One minute it would be friendly and pleasant and the next, it would be cussing up a storm and physically tormenting them.  When asked who and what it was, it would give different answers.  One of the identities  was that of the witch of a neighbor woman, Kate Batts.  Many believed this theory and the Bell Witch simply became known as “Kate.”

John Bell insisted that his family keep this a secret and they did so for a year.  Finally, John shared their secret with his closest friend, James Johnston, and invited him and his wife to stay the night at their home to experience it for themselves.  The “witch” did not disappoint and finally the Bells’ secret was out.  The news of the Bells’ “family problem” traveled so far and much that even President Andrew Jackson decided he must come out to the property to check it out.

On December 20, 1820, John died.  It was believed that Kate poisoned him.  And, in 1821, Betsy broke off her engagement with Joshua Gardner.

After John died and Betsy broke off her engagement, Kate said her farewells and promised to return in seven years.  In 1828, she returned for a few weeks.  She had long talks with John Bell Jr about the past, present and future.  She also made some predictions about the future which are otherworldly.  She then bid farewell again and said she would return in one hundred and seven years, which would have been 1935.  Some believe she never left at all though and has just taken up residence inside the cave because there has continued to be strange occurrences in the area. 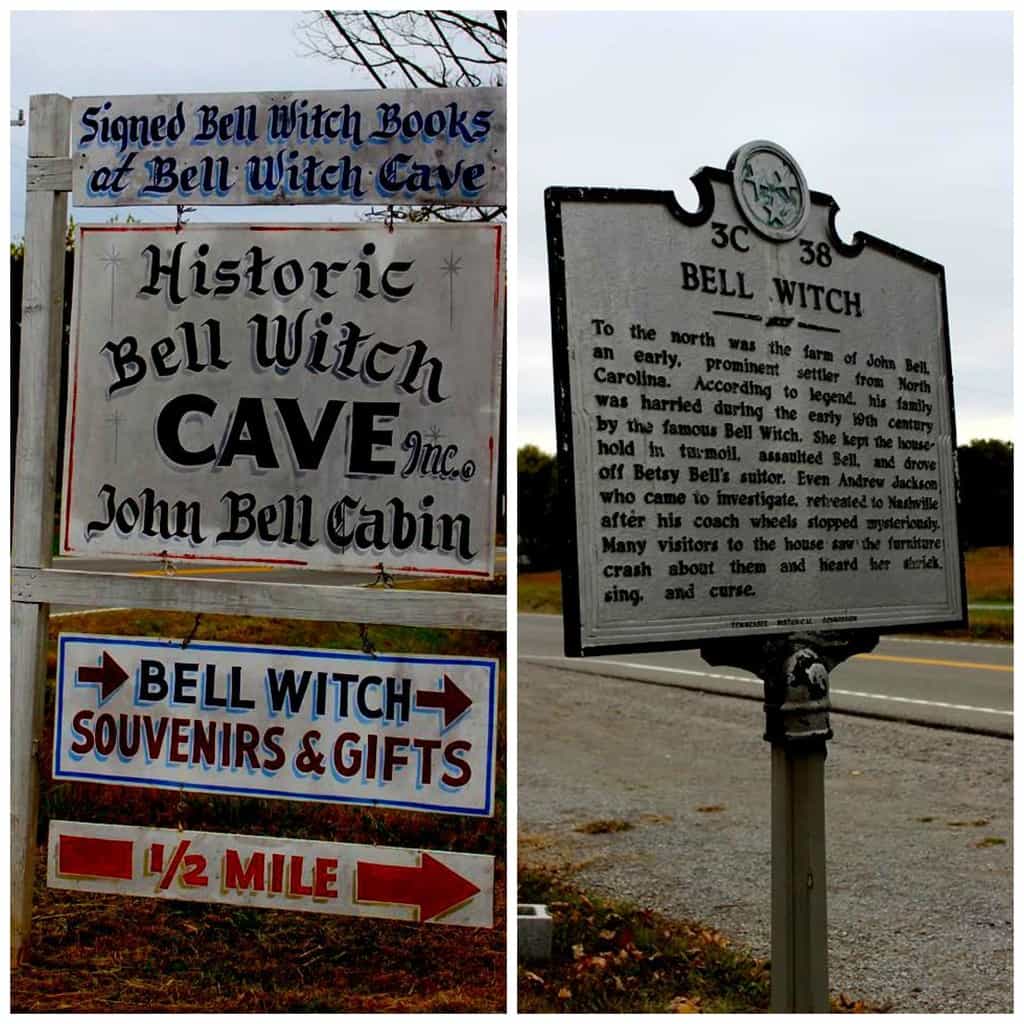 When visiting, you have the option of a tour through the cave, the cabin, or a combination of both.  I chose the combination, grabbed some hot chocolate, and went to stand around the fire while waiting for my first tour.  After enough people had gathered, we were headed down to the cave which is a short walk from the cabin along the riverbed. 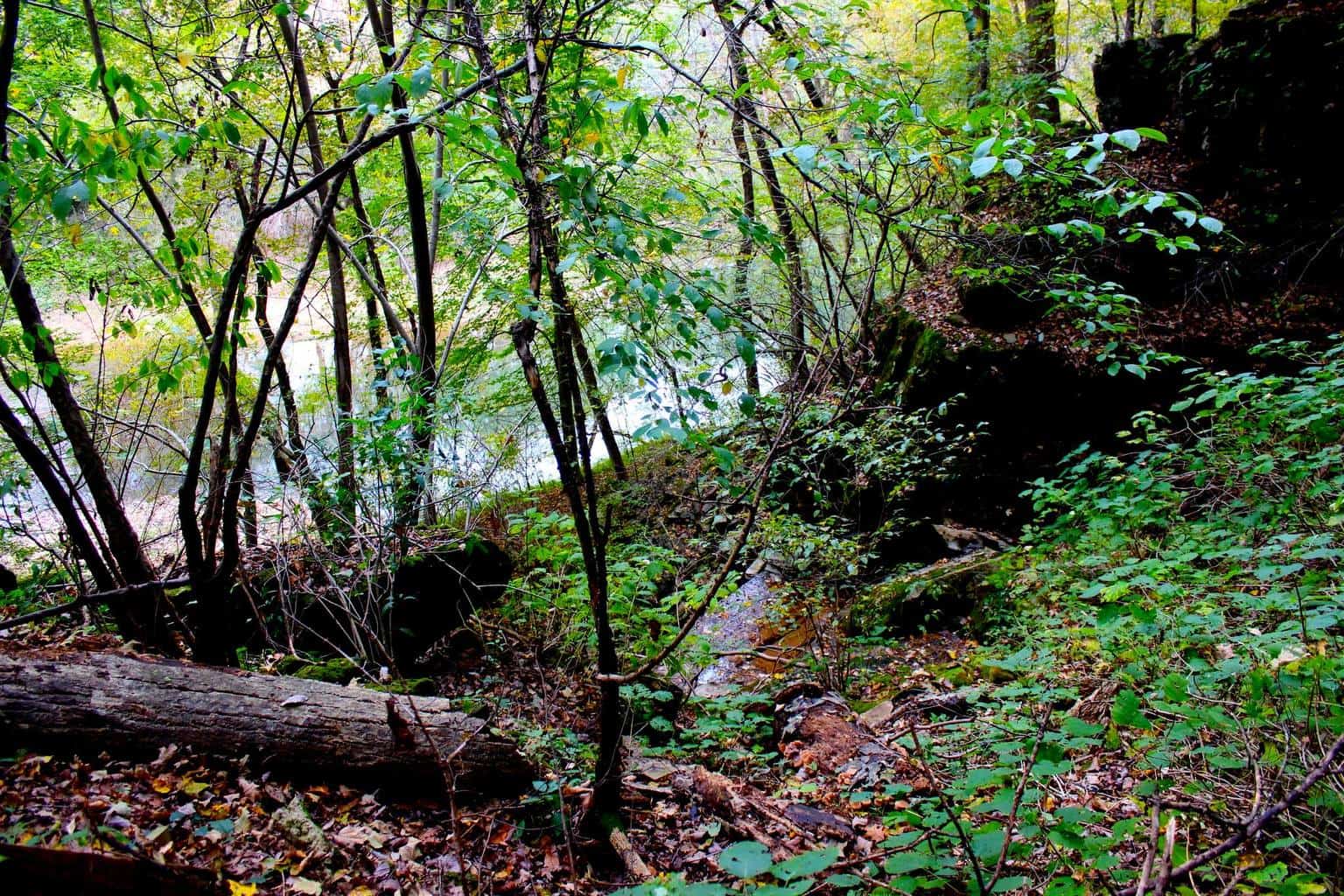 The bluff above the entrance to the cave is an old ancient Indian burial ground.  The previous owners of the land had an archaeologist come out from Nashville and they estimated the graves to be somewhere between 3,000-5,000 years old.  They were buried sitting straight up in the ground facing east and this is how they were able to determine the time period.  It is also believed that these are the ancestors of the Chickasaw Indians.  While many believe that “Kate” may have taken up residence here after haunting the Bells, others believe that the entity may have actually originated in the cave.  Did the Indians just happen to bury their dead there or did they have a reason for choosing that spot?

During the tour, I learned that in the 1990’s, a paranormal investigator came to the cave and set up night vision video cameras throughout the cave.  He picked up something on camera that could not be explained.  He took it to several experts and some believe that it could have been a vortex or a porthole, basically a spiritual doorway.  Whatever it was, showed up and was gone in 3/100th of a second.

So, did the Indians just happen to bury their dead here or did they know this porthole existed and wanted their loved ones to be closer to the spiritual world?  I don’t guess we will ever really know where the entity originated.

Nobody really even knows for sure what this bell witch thing was anyways.  Was it the neighbor woman?  Was it a spirit that escaped from the porthole?  Was it something else entirely?

In the first room of the cave is a stone box Indian grave.  This was found down the river a ways and was actually put in this room specifically for the tour. An anthropologist from Bowling Green, KY came out and said that the grave was from a young Indian girl that had been dead somwhere between 300-1500 years.   Someone broke in one night and stole the remains, but the box is still present.

While unfortunately, nothing supernatural or crazy happened on my time at the cave, there have been lots of reports of unexplained occurrences.  Cameras and phones have been known to shut off and lock up inside the cave.  They also have had people’s phones and cameras that keep repeatedly taking pictures and won’t stop or turn off.  Weird and unexplained things have shown up in pictures.  While on the tour, there have been dark shadows going along the length of the cave that everyone saw, but there was no explanation for it.

Ashley Hubbard
Ashley Hubbard is a blogger and freelance writer based in Nashville, Tennessee focusing on sustainability, travel, veganism, mental health, and more. Passionate about animal rights, sustainable travel, and social impact, she seeks out ethical experiences whether at home or on the road. She shares these experiences on her website, wild-hearted.com.

Places To Visit In the Netherlands Apart From Amsterdam

Travelers Share Their Favorite National Parks in the World

Cooking Our Way Around the World | Ireland